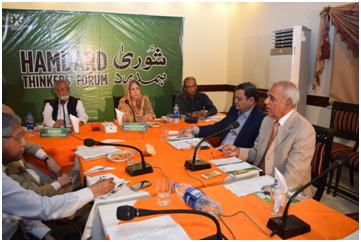 Speakers at the meeting of Shura Hamdrd Karachi chapter urged the government to introduce collective farming and vocational education to boost agriculture and reduce unemployment and also to include the students of madaris in national educational main stream to forge unity among the nation. The meeting was held yesterday on the theme: “Situation of national economy and possibilities in near future”, chaired by Engineer Anwarul Haq Siddiqui, Senior Fellow, Institution of Engineers Pakistan at a local club.

Speaking on the occasion, Eng. Anwarul Haq Siddiqui said that the policy of nationalization, implemented by the then government in 1970s and the political instability had sabotaged the country’s economic progress otherwise Pakistan made exemplary progress in early decades of her history as Quaid-i-Azam Muhammad Ali Jinnah inaugurated Valika Textile Mill in 1948 and Pakistan Industrial Development Corporation (PIDC) was established in 1952, which was a brain child of Ghulam Farooque and promoted by the first prime minister of Pakistan, Liaquat Ali Khan. The PIDC was responsible for rapid industrialization in the country as it had established the industries at those places where the private sector was hesitant to go. But, in 1970s the policy of nationalization of industries and banks had caused the investors to run from the country, thus the wheel of industrial development was stopped and deterioration of economy started, he added.

He said, most of the civil political governments were indulged in mismanagement, corruption and nepotism with no merit for competent men to come forward while military governments had established discipline in the country but they gave more chance to military personnel to run the affairs of the country making the civil bureaucracy an idle wheel, which created a hugeremoteness between public and martial law governments, resulted in political instability in the country that naturally put the block on economic growth. The strategy and long-term planning needed for economic progress has been wanting in our country because of lack of consensus on national affairs such as Kalabagh Dam, he added.

Paying tribute to Allama Iqbal on his 141st birth anniversary, he said that he didn’t see the dream of Pakistan, but it was his considered and thought out vision, he asserted.

Mrs. Sadia Rashid, President, Shura Hamdard Pakistan while addressing the meeting said that the progress and development, made by Pakistan in early two decades of her history, was no doubt praiseworthy as South Korea had copied Pakistan’s ‘Five years Development Plan’ and made mentionable progress. Pakistanis were not habitual of making savings so it was necessary to give them some incentives to save money, it would also make them frugal.

While paying tribute to Allama Iqbal she said that he was really a visionary poet as his prophecy about Chinease had come true as now thousands of Chinease Youths were taking higher education in United States of America.

Zafar Iqbal, President, Defense Residents Society said that the condition of tax-payers was getting bad to worse, because of the corruption and plundering of national wealth by the previous rulers and the retribution of their wrongdoings are being borne by the present new rulers of Pakistan.

Prof. Dr. Akhlaque Ahmed was of the view that the condition put forth by the creditors was that Pakistan should control the terrorism first, however the new Pakistan government was trying its level best to control the situation of law & order and terror. The previous rulers had entrapped the country in the quagmire of loans.

‘Should judiciary inactive, it paves the way of revolution. Thanks God our judiciary is active and we are safe so we should emphasize on the promotion of education, its infrastructure and good teachers as without good teachers we cannot expect good results of education’, he concluded.

Commodore (Rtd) Sadeed Anwar Malik said that we should bring the religious schools (Madaris) into the mainstream of country’s educational system and emphasize on vocational education to provide skilled hands to the country. We have to fight a war for the development of agriculture and industry and spreading of education in the country, he added.

He said that the experts of agriculture be allowed to establish their private practice in order to give advices and counsels to farmers for the more growth of agriculture produce. Similarly collective farming should be introduced in agriculture sector and privatization of PIA and Steel Mills be started in order to make them profitable and efficient like PTCL and PIDC be made active again, he suggested.