National Investment Trust Limited (NITL), has declared its annual results for its funds under management for the year ended 30th June 2022. NITL has distributed total dividend of over Rs. 4.77 Billion for the year FY22 representing an impressive 73% growth over previous year.… Continue Mastercard has announced a strategic partnership with Bank Alfalah, which will see the bank’s online payment gateway infrastructure accept a wider array of cards, including the ability to make China Union Pay online payments in the market for the first time.… Continue Easypaisa, Pakistan’s leading digital payments app, has partnered with the Bank of Khyber to ensure seamless distribution of funds to beneficiaries in KPK under the Insaf Food Programme.

Through the strategic partnership, beneficiaries of the programme will be able to receive PKR 2100 every month in their Easypaisa mobile wallet or collect cash from any Easypaisa agent to meet their essential food related needs.… Continue complimentary insurance coverages in collaboration with TPL Insurance as an insurance solution provider.

To mark the occasion, an MoU signing ceremony was held at the Silkbank Head Office, Karachi on 29th June 2022.… Continue

BankIslami, Pakistan’s leading Islamic financial institution, served as the title sponsor for Bahria Society of Professional Communication (BSPC) Talks, a platform where captivating stories and ideas are exchanged that have the potential to transform the listeners’ lives. BSPC is a student-run society at Bahria University that focuses on the development of communication skills among its members by organizing various workshops and seminars.… Continue

Pak-Qatar General Takaful signed MoU with Auto One – The largest Automotive marketplace for car buyers and sellers in Pakistan. They deal with numerous certified second-hand and used, cars from large numbers of dealers and private sellers.

After a signing ceremony was held in Karachi.… Continue

Chairman Businessmen Group in the KCCI, Zubair Motiwala, and KCCI President, Muhammad Idrees have extended gratitude to Prime Minister Shahbaz Sharif for taking interest in the implementation of the Federal Shariah Court’s decision of introducing Riba Free banking in Pakistan. They have requested the government to introduce interest free banking in Pakistan according to the Islamic Principles and implement the court’s decision in true letter and spirit. … Continue Meezan Bank, Pakistan’s leading Islamic bank, has installed its 1,000th Automated Teller Machine (ATM). This landmark cash dispensing terminal has been installed at Chashma in District Mianwali. Since its inception, the bank has expanded its ATMs across Pakistan’s rural and semi-urban regions, providing round-the-clock access to cash and furthering basic banking and financial inclusion for the masses.… Continue

Foreign reserves held by the State Bank of Pakistan: US$ 10,309.0 million

Hysab Kytab – a leading FinTech that offers a suite of financial management solutions- has signed a strategic partnership with Winikon – an IT services company specialized in the banking business to enhance customers’ banking experience. This collaboration will help provide individual-level personalized financial management products and services to banking customers.… Continue

As per the amendments made to the Budget announced on June 10th, the recurring tax rate for Banks appears to be 43% instead of the 47% being determined earlier. In our Budget note on June 10th, we had estimated a 10-13% decline in recurring EPS estimates and a commensurate decline in target prices.… Continue National Bank of Pakistan (NBP), the largest public sector commercial bank, has taken measures to reduce power and energy consumption across its network in the country. The initiative will support Government of Pakistan’s drive towards energy and fuel conservation.

NBP staff (other than the branches & critical staff) have been advised to observe ‘Work From Home (WFH)’ and operate remotely on Wednesday and Friday (for Head Office staff) and Tuesday and Thursday (for Regional Office staff).… Continue

State Bank of Pakistan (SBP) has launched a series of videos in national and regional languages about agriculture financing products and procedures to create awareness among the farming communities across the country, especially in the underserved areas. These videos will be disseminated through social media and digital platforms of SBP and all agriculture lending banks.… Continue 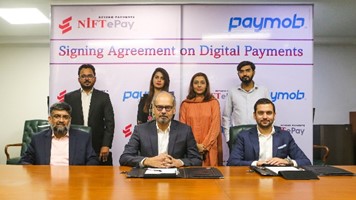 The Paymob, the leading omni-channel financial services platform in the MENAP region, signed an agreement with National Institutional Facilitation Technologies (NIFT) to facilitate digital payments in Pakistan and to secure payment transfers. Under the agreement, Paymob will enable digital payments for their merchants using the NIFT ePay payment platform which supports account, wallet, and card-based payments.… Continue

BenchMatrix has successfully facilitated Standard Chartered Bank Pakistan (SCBPL) in the installation and implementation of its RiskNucleus® GRC, with the goal to digitize the Bank’s compliance risk management processes.

The implementation of this comprehensive solution will assist Standard Chartered in holistically managing compliance processes and ensure regulatory compliance.… Continue Pakistan’s leading fintech JazzCash, in collaboration with Bank of Khyber (BoK), is strengthening the country’s digital payments ecosystem. JazzCash users living in Khyber Pakhtunkhwa (KPK) will now be able to receive PKR 2,100 for the government’s Insaaf Food Programme through the JazzCash retail network and existing JazzCash customers will receive funds in their JazzCash mobile wallets.… Continue

Khushhali Microfinance Bank Limited is one of the leading financial institutions in Pakistan, with a vision to accelerate socio-economic development, by promoting financial inclusion of the vast unbanked segment in Pakistan. Recently, Khushhali Microfinance Bank partnered with the ‘Sindh Graduates Association’ (SGA) to launch a skills-development program for women in Mirpurkhas Sindh, to create more livelihood opportunities for this impoverished segment.… Continue

SBP welcomes the Federal Shariat Court’s Judgement of April 28, 2022 on Riba case, as has already been done by the Honorable Finance Minister. In particular, we appreciate the substantive part of the decision.

As the prime custodian and regulator of the financial and monetary framework of the Islamic Republic of Pakistan, SBP is deeply committed to ensuring compliance with the injunctions of Islam, in particular those pertaining to riba, while protecting the stability and security of the financial sector of the country that functions as part of the global financial system. … Continue

NdcTech, Pakistan’s leading IT and consulting company was invited to showcase its offerings as a Silver Sponsor at the Temenos Community Forum 2022, one of the most prestigious banking technology events held recently at the world’s financial city, London, UK. Ammara Masood, CEO and President of NdcTech and Asif Peer, CEO Systems Ltd were present at this international forum, alongside other key management

The event not only brought together banking professionals from across the globe, but also provided a huge opportunity to IT Service providers and Fintechs to showcase their offerings.… Continue Mastercard has reaffirmed its commitment to the GCC and wider region through the appointment of Mastercard veteran J.K. Khalil to lead its operations across the MENA East Cluster in his new role as Cluster General Manager.

In his new role, Khalil is responsible for the UAE, Qatar, Kuwait, Pakistan, and Oman, which make up Mastercard’s MENA East Cluster.… Continue

Pak-Qatar Family Takaful Limited (PQFTL) came into an MOU with Sehat Kahani, to promote Takaful products through the digital medium. Sehat Kahani and PQFTL aim to make Takaful products, affordable, and accessible for the major part of the population currently not being served.… Continue This certification, which is a leading payment card data security standard, is another milestone in Meezan Bank’s journey towards implementation of data security and control systems that ensure customer security, sensitive card data protection and fraud risk prevention.… Continue