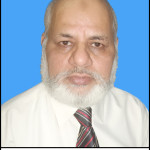 The magazine started as weekly publication and later turned into full fledged monthly magazine of Pakistan, covering the trade, industry, import & export, commerce and much more news of the country as well as of trading partners of Pakistan. It keeps you abreast of reliable and latest information about the current business and industrial trends and also critical analysis of the political events.

Mr. Abdul Rauf Siddiqi, Managing Editor of the magazine expired on 28th October, 2014.  After the departure of Mr. Abdul Rauf Siddiqi, his sons, Abdul Rab Siddiqi, Abdul Rafay Siddiqi and other grand sons are bringing it without any interruption. The magazine is being continuously printed without any interruption with the support of Almighty Allah and long list of its supporters.