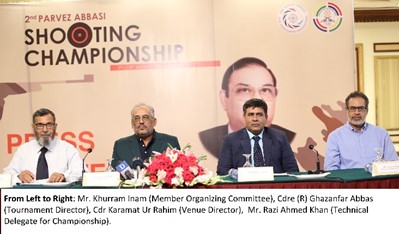 This is a unique event in Pakistan’s shooting calendar, as the tournament is open to everyone including general public as well as teams representing Pakistan Navy, Pakistan Army, Pakistan Air Force, Police and other law enforcement agencies. Over 400 shooters will compete in Air Pistol, Skeet and Trap categories during the 6-day tournament.

This annual event is held to celebrate the life and achievements of Parvez Abbasi, the founding secretary of the National Rifle Association and the driving force behind promotion of shooting sports in Pakistan.

All the events will be conducted as per the rules laid out by the International Shooting Sport Federation, governing body of the Olympic Shooting events in Rifle, Pistol and Shotgun categories.

Commodore Ghazanfar Abbas extended his appreciation to the Abbasi family, especially Mrs. Askara Abbasi, wife of late Parvez Abbasi for patronizing the event and providing yet another opportunity to sports enthusiasts to compete in a ranking event.

Mrs. Askara Abbasi will be the chief guest at the closing ceremony scheduled to be held on August 12, 2018.