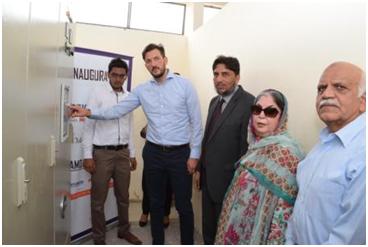 The 500 KW Gird Tie Solar Power System and Plantation Drive were yesterday inaugurated at Hamdard University Karachi Main Campus. Speaking on the occasion, after inaugurating the Solar Power Plant and planting a sapling at Hamdard University main campus, the Chief Guest and CEO of PRETTL Company, Germany, Mr. Steffen Thierfelder said that Germany had sun for 156 days only even then we were taking full advantage of solar energy as every roof in Germany was occupied with solar panels; Pakistan has the sun for 365 days and this country should utilize it with full strength and Hamdard University is liable to be congratulated as this university has taken initiative by installing a solar power plant at its Karachi main campus.

‘We are specialist in this technology and the panels used in this solar power system are made by the South Korea’s Company FEFU, who have special expertise in this work,’ Mr. Steffen added.

Answering to a question, he said that the total cost of this plant amounted to Rs. Five crore which would be recovered within 3 years and after five years would be at zero cost, because 50 per cent of university’s electricity requirements would be met by this plant, he added.