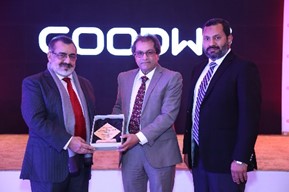 Pakistan Muslim League-Nawaz (PML-N) Senator Capt. Shaheen Khalid Butt hoped that Letters of Credit (LCs) for imports will be opened soon, which will help facilitate the solar energy sector in the country. “Clean energy is absolutely vital not just for the environment but because it’s cost effective for the consumers. In this context, I talked to Prime Minister Shehbaz Sharif and Finance Minister Ishaq Dar, and they expressed the hope that the government would soon be able to open LCs for imports as soon as the economy’s stabilization is ensured,” said the Senator Capt. Shaheen Khalid Butt while talking to journalists at a launch ceremony of 3-Phase Hybrid 30KW solar power equipment by Goodwe, solar inverter manufacturing company, on Solar Power Day at a local hotel on Wednesday.

Senator Capt. Shaheen Khalid Butt said that solar power was a very clean and efficient energy source, which must be tapped to optimum level to protect the environment. “Pakistan has suffered a great deal in the form of devastating floods due to global carbon emissions despite contributing very little towards greenhouse gases,” he said, adding that the West, especially the European countries must compensate for the loss incurred by Pakistan due to global warming. “The recent $10 billion to $11 billion pledges by the world community for rehabilitation of flood victims were nothing compared to the colossal loss of life and property suffered by the Pakistanis,” he added.

He said the Pakistan government must help and facilitate the renewable energy sector, which is the answer to Pakistan’s energy woes in the future. “Everyone, including the country and the people, will benefit from solar energy,” he said, therefore the government must patronize the renewable energy sector as the US government also helped manufacturers, policymakers and the consumers. “The consumers can also sell out surplus energy in excess to their own usage through net-metering,” he said and proposed that the government should launch a one-window operation to facilitate the manufacturers and the public in installation of solar energy products.

Earlier, speaking on the occasion, Goodwe country manager Syed Salman Mohiuddin said that LCs closure had caused significant damage to the solar energy sector, while the widening gap between supply and demand had also raised prices of products up to three times in the consumer market to the detriment of the public.

He said that Pakistan’s oil bill has gone up to 65 percent of the Gross Domestic Product (GDP). “If the Pakistan government supports the solar energy sector for 4 to 5 years, it can reduce Pakistan’s forex oil bill substantially,” he added.