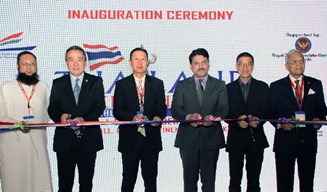 Speaking at the inaugural ceremony, President KCCI called for further enhancement of bilateral trade between the two countries. “Pakistan’s imports from Thailand ascended to $1400.36 million in calendar year 2017 against 1008.45 million which shows 38.8 percent growth while Pakistan exports to Thailand increased by 24.4 percent to $148.32 million from $119.21 million”, Malik added.

Pakistan exports yarn and fibers, chemicals, finished oils, edible meat to Thailand. “There are plenty of other Pakistani products and services which are capable of capturing a sizeable market and promotional activities”, Malik observed.

President KCCI called for exploring opportunities and avenues for setting up joint ventures between the companies of both countries. “Undertaking joint venture in different sectors of the economy would not only go in favor of the two countries but will also help them to jointly explore and penetrate into some of the most promising and untapped markets”, he said.

Apipan Cheecharoen while speaking on the occasion highlighted the importance of Pakistan as a growing economy. “Pakistan with the population of around 200 million offers attractive opportunities to the investors from across the globe”. “The population’s major segment comprises of young people and middle class that is a major attraction for the international investors and makes it major market in Asia”, he noted.

Director Event and Conference International Rashidul Haq said they are expecting more than 50,000 visitors over the course of three days. “We have seen in the past that such exhibition provide an excellent platform for businessmen from both the countries to meet and build relations”, he added.

The exhibition is organized by Department of International Trade Promotion, Ministry of Commerce, Royal Thai Government with the support of Royal Thai Consulate-General Karachi and being managed by Event and Conference International. Exhibition will continue till Monday.