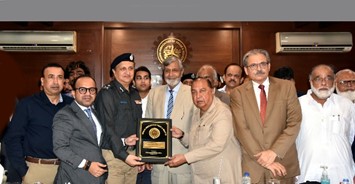 Additional IG Karachi Javed Alam Odhu said that last year 5500 criminals were arrested, while this year this number has exceeded 6600. It is hoped that the Safe City project will be launched in Karachi in 2 years, which will help in preventing crimes. He said that Karachi city was ranked 106th on the global list of 250 crime-affected cities last year, which has improved to 128th this year. The Additional IG Karachi said that after 2012 and 2013, it was the business community that raised its voice against kidnappings for ransom, target killings and extortions in the city, following which the law enforcement agencies, especially the Rangers and the police took action and restored the peace of the city. He further said that he welcomes KATI’s concerns on the jurisdiction of police stations in the city and will decide the limitations and jurisdiction of police stations in consultation with KATI. Javed Alam Odhu said that in Fifth Generation War, negative propaganda is used to affect institutions and the reputation or economy of any country, a well-known export company in Korangi a few days ago was also fall victim to the same, which was fabricated and negative propaganda aimed to weaken Karachi economically. He said that steps are being taken to get new vehicles, and soon new mobile vehicles will be provided to police stations.

Earlier, KATI Patron-in-Chief SM Muneer said that the economy is going through a crisis while the negative propaganda against the Pakistan Army on social media is condemnable. The army is doing a commendable job. He expressed grief over the martyrdom of 6 army soldiers in an army helicopter accident yesterday in Balochistan. SM Muneer said that the business community will continue to cooperate with law enforcement agencies for the improvement of the country’s economy and the law and order situation.

President of KATI Salman Aslam said that Pakistan is currently facing many problems, more than 40 million people have been affected by flood disasters, crops have been washed away, and the problem of food security in the country is becoming serious. KATI, under the patronage of SM Muneer, was the first association to start relief operations for flood victims and sponsored more than 20,000 families. Salman Aslam said that the industrialists are worried about the increase in the cost of production. President KATI said that crime incidents have increased due to rising inflation. In this regard, the responsibility of the law enforcement agencies and especially the police increases to provide protection to the business community.
President KATI said that the display of weapons is becoming common in Karachi, the display and use of weapons should be banned. He said that peace can be established only by de-arming the city.

Zubair Chhaya, CEO of KITE Limited, said that Korangi Industrial Area is the economic artery of Karachi, however, street crime has increased due to which people are insecure. In Korangi and Landhi, the post of SP is vacant for the last 2 months and should be appointed soon. Korangi Industrial Police Station and Zaman Town Police Station have a huge area which is practically impossible to cover by a single police station. Less area should be kept in the limits of police stations. Zubair Chhaya said that the police played a very positive role in the case of blackmailing of a well-known export company in Korangi industrial area and brought out the facts through responsible investigation, which saved the industry with an export worth of 400 million dollars from destruction, in which KATI and President Salman Aslam also participated seriously. He said that the foreign investors were canceling the order by these rumors which were prevented by the timely action of KATI and police otherwise many people in the city would have been unemployed. He said that the police and Rangers have made countless sacrifices for the peace of the city, for which the business community salutes them.

UBG Sindh Region Chairman Khalid Tawab said that CPLC was established for liaison among the business community. However, the law and order situation is deteriorating in the city due to illegal immigrants. He said that due to the efforts of the police and law enforcement agencies, peace has been established in Karachi, which once again the criminal elements are trying to destroy.

Standing Committee Chairman Danish Khan said that Karachi is the economic hub of Pakistan, 15 years ago the city contributed 78 percent of the country’s revenue, but today it has reduced to 64 to 65 percent due to the plight of capital and relocation of the industry abroad or domestically. He said that the situation in the city is much better than in 2010, but there has been a significant increase in street crime. Unemployment has increased due to the economic crisis, which has also increased crime incidents. He said that the police lacks resources, but in this regard, the business community and KATI are ready to cooperate with the police in all possible ways. He said that the Safe City project should be started immediately in Karachi to provide protection to the people.