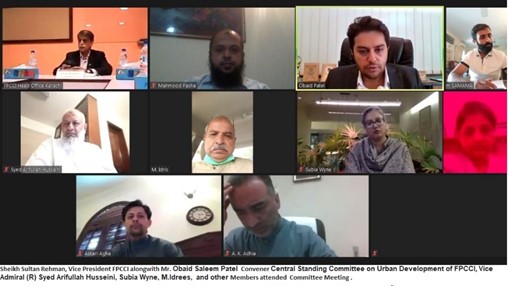 The first meeting of the Central Standing Committee on Urban Development of Federation of Pakistan Chambers of Commerce & Industry (FPCCI) 2020 concluded that holistic, inclusive and planned urban development of major Pakistani cities is a crucial prerequisite for GDP growth in Pakistan.

Convener of the urban development committee FPCCI, Obaid Saleem Patel pointed out that by 2025, half of Pakistan’s population is predicted to be living in cities and this steeply rising urbanization trend in Pakistan will increase pressure upon the already fragile state of affairs of Pakistani cities, by compounding the existing acute housing shortage of nearly 10 million units, further burdening basic utilities’ demand like Electricity, water and gas, putting pressure on the need for a robust and subsidized public transport in cities to cater to larger number of commuters, affordable and easily accessible health and education etc.

He noticed that Pakistani cities were contributing less to the GDP (55%) inspite having a higher urbanized population then some other regional countries and pointed out that better urban development with an eye on the future and inter departmental coordination amongst provincial and local governments can help encourage smart planning and efficient distribution of important resources and prevent leakages and losses and help build a conducive environment for cities and businesses to efficiently contribute to the national exchequer likely resulting in higher tax revenues for the government.

Members attending the meeting highlighted the need to make use of international standards in town planning and zoning with renewed master planning and relevant building bi laws to develop Pakistani cities along modern lines to encourage foreign investment and tourism in Pakistani cities, resulting in economic growth.

Vice Admiral (R) Syed Arifullah Husseini observed that under the current covid 19 pandemic, the need for urban planning had become even more relevant and the need for building smaller cities across Pakistan to cater to pressure upon existing infrastructure has become necessary to guarantee provision of basic facilities like health and education to the populace can be ensured and the per sq feet to number of persons living ratio can be drastically improved and large businesses can expand outwards in smaller industrial hubs so Pakistan can become a regional economic hub and increase her GDP.

The committee finally laid emphasis upon the need for closer liason with relevant government officials to make use of the current government’s vision of vertical growth in cities to cater to swelling urban population, encouraging renewable energy policy and green friendly initiatives in line with climate change so that the actionable suggestions of the business community regarding urban development and economic growth could be deliberated upon for the future generations of urban Pakistan.