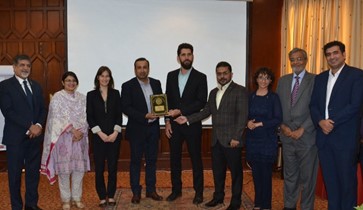 Mr. Miner said that Karachi is a lively city and perception of Pakistan is changing for better globally. He said that PM Khan has vowed many positive measures to counter extremism and money-laundering in Pakistan and also showed firm intentions to bring reform in economic system of the country. And on other hand Pakistan is also playing an important role for peace process in Afghanistan. He noted that positive results of these measures were expected and that is the reason American companies and investors are now looking forward to opportunities in Pakistan.
President KATI Danish Khan said that US is the largest trade partner of Pakistan. He said that we look forward for to expend this relation for the mutual interest of both countries. He said that to enhance the access of Pakistani products to US markets there is need to facilitation. He urged relaxation in tariffs for Pakistani products. Danish Khan suggested that after affective measures to reinstate law& order and curbing money laundering business environment of Pakistan has got far better. He added that there are many opportunities for American companies and investors in agriculture, livestock, and food processing and seafood sectors.

Masood Naqi said that United States has invested enormously in social and development sector of Pakistan which should be appreciated. “We should reconsider the strategy, social indicators can only be improve with industrialization and economic prosperity. Our American friends should come forward to invest in industrial sector of Pakistan and certainly this will be more effective for social and development indicators” he noted. He further said that to improve business to business relation and interaction of both countries US should reconsider its travel advisories for its citizens. SVP Faraz-ur-Rehman suggested that with lower cost of human resource and production Pakistan would be the suitable destination for American manufacturers. Economic officer of the consulate Jean foster and economic specialist Mahreen Kashif also accompanied the economic unite chief in this meeting.