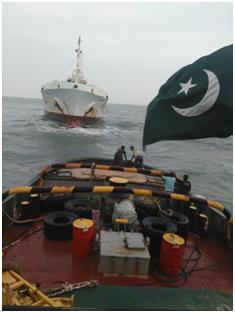 A panama flag vessel “CHEMTRANS 1” was rescued by Karachi Port Trust (KPT) on Saturday 16th July and towed the ill fated vessel from 11 nautical miles from KPT approach channel under extreme monsoon weather and averted  an eminent major disaster i.e grounding and pollution. According to Press Release of KPT, an SOS signal of CHEMSTRANS 1was revived at KPT “CRISIS MANAGEMENT CENTRE” reporting breakdown of Engine and lost of both Anchors due to bad weather and reported fast drifting towards shore with 12 Indian crew onboard.

KPT’s 3 Tugs and a private Tug “Endeavor” hired by her local agent Golden Shipping participated in the towing operation. Services of PN Tugs as standby and coordination with JMICCwere also made by KPT under the under the direction of Chairman KPT Vice Admiral (R) Shafqat Jawed. The whole rescue operation lasted for 16 hours.

The vessel was carrying Benzene chemical sailed from Karachi Port on 2nd July for her next destination but her engine failed and one by one she lost both of her anchors at the outer anchorage (outside KPT Channel).

The vessel started drifting on the mercy of high sea waves and KPT CMC team timely rescued her from grounding and berthed her at  Mooring inside the KPT channel. The overall length of Chemtrans 1 is 117 meter, Breadth of 16 m and draft of 6 m with Gross Tonnage of 3533MT and 6058 dead weight.

Due to untiring efforts of KPT, imminent disaster of marine pollution was averted.

KPT being the natural and premier port of the Nation provides shelter to ships even during the roughest season. The port has always remain vigilant in providing facilities to shipping lines and trade communities which has translated well into results the port has nurtured over the years.