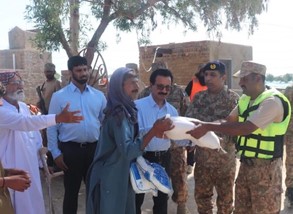 The donations are through the DP World Foundation, launched in April to carry out humanitarian work and facilitate initiatives financed by the public and private sectors.

“The devastation and impact on Pakistan are heart-breaking. Visiting areas affected by natural disasters always forces you to put things into perspective as you try to fathom the enormity of the situation. It could be months before we understand the scale of the damage. However, for now, we must look at the most efficient ways to extend relief to aid local communities in distress,” said Bin Sulayem.

Warehousing space at DP World’s facilities in Karachi will be set aside for logistics support, with DP World covering the cost of warehousing and stock management.

“The disaster is much worse than what most people realise. With more than one-third of the country affected, Pakistan’s economy has suffered a devastating blow that will run into the billions. As leaders representing the global business community, it is imperative to identify immediate support and relief for the people of Pakistan. We must collaborate closely with government institutions and join hands with private partners or NGOs, to mobilise support across the community,” he added.

DP World has provided expertise and resources to help the humanitarian community respond to major disasters since signing an agreement with the UN’s World Food Program in 2017. The company uses its experience as a global trade enabler working across six continents to help connect organisations, communities and individuals with the resources they need during emergencies.

“It is a massive wake-up call for the global community to urgently address the tipping points of climate change. I was due to attend the UN General Assembly and UN Climate Week in New York to engage with leaders worldwide to discuss how to tackle these issues. However, after hearing what happened in Pakistan, I wanted to see for myself what DP World can do now to contribute to the relief that is so desperately needed,” Bin Sulayem said.

“We cannot continue to turn a blind eye to an imminent threat that will undoubtedly impact our future generations if we don’t act immediately,” he said. The upcoming COP27 climate summit in Sharm El Sheikh and COP28 in 2023 in the UAE will provide powerful platforms to discuss practical and financial solutions “to protect vulnerable countries and fragile communities, like those suffering in Pakistan, from the effects of natural disasters,” he added.

DP World has continuously invested in upgrading QICT’s infrastructure to serve Pakistan’s import and export trade and meet its immense growth potential. Earlier this month, as it marks 25 years of operations in Pakistan, DP World took delivery of nine rubber tyred gantry cranes which will boost efficiencies at the terminal and benefit Pakistan’s customers.