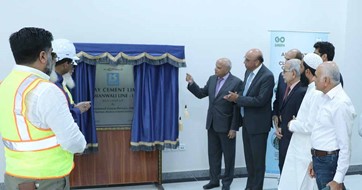 Bestway Cement Limited, Pakistan’s 2 nd largest cement manufacturer with an annual production capacity of 10.8 million tonnes achieved another milestone today. Early morning on 20 th October the Company lit up its Kiln with 7,200 tonnes per day clinker capacity at its greenfield Mianwali Plant. A simple ceremony was held at the plant premises to mark the occasion which was attended by the Chairman, Bestway Group, Sir Mohammed Anwar Pervez OBE HPk, the Group’s CEO, Lord Zameer M. Choudrey CBE SI Pk, Bestway’s senior officials and delegates from the plant suppliers, Sinoma. Sir Mohammad Anwar Pervez OBE HPk cut the ribbon to inaugurate the lighting up of the Kiln.

Speaking on the occasion, Bestway Group’s CEO, Lord Choudrey, said “it’s a proud day for the Company. Our new greenfield production line at Mianwali has been set up in a record time of less than 18 months from establishing the L/C to lighting up the Kiln. This has been achieved despite various hurdles and supply chain disruptions caused by Covid-19. This beats our own previous record of setting up greenfield plant in 20 months. By virtue of Mianwali plant, Bestway Cement has now become the largest cement producer in the country. The state-of–the-art plant has its own Waste Heat Recovery Power Plant of 9MWs while work on setting up of Solar Power Generation of 20 MWs has also commenced”. Lord Choudrey further added that work on the brownfield production line of 7,200 tonnes per day clinker capacity at Hattar site was also at an advanced stage and was likely to be operational by March 2023.

While expressing his views, Sir Mohammed Anwar Pervez reiterated Bestway Group’s unrelenting commitment towards economic development of Pakistan, highlighted that the Bestway Cement was one of the largest taxpayers in the country. He also expressed his delight over the fact that the Company was the most environmentally friendly cement producer in Pakistan by virtue of it being the only cement producer to have Waste Heat Recovery Power Plants at all its sites, installed more than 55 MWs of captive solar power generation with another 55 MWs being installed at all its sites, introduced Air Cooled Condenser System and developed large rain harvesting reservoirs in order to eliminate reliance on groundwater for industrial use.