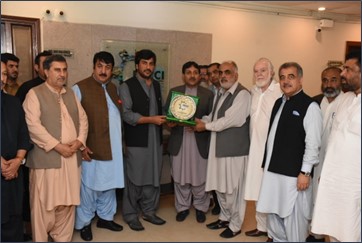 Daroo Khan Achakzai, President FPCCI, other Office Bearers of FPCCI and members of the Federation of Pakistan Chambers of Commerce & Industry (FPCCI). They discussed and exchanged views on the economic issues including investment opportunities, Special Economic Zones, NFC Awards as well as agriculture and livestock of Baluchistan.

Earlier Engr. Daroo Khan Achakzi in his welcome address apprised the delegation about the role being played by FPCCI in the economic activities on national and international level and interaction between FPCCI and the government.

He also briefed the members about the international activities being carried out by FPCCI on International Forums particularly on ECO CCI, SAARC CCI, SCO-BC, Islamic chamber of commerce and Industry and Common wealth etc. He informed the members that FPCCI has particular focus on exploring the opportunities existing in Baluchistan which need to be projected particularly in the backdrop of CPEC and its economic zones. He further added that the economy of Baluchistan is confronted with many challenges particularly with respect to the infrastructure facilities, lack of and transportation system. He urged the government to focus on least developed areas of Baluchistan. He stated that Gwadar is the hope of beacon and economic development in Baluchistan.

The team of the legislators highlighted the issues of Baluchistan with reference to infrastructure and fiancé facilities from Banks and development of other projects for business projects. Baluchistan is facing with various sort of challenges including poverty, unemployment, lack of economic activities and law & order etc. Baluchistan has no representation on the government boards, they added

They also lamented that there is lack of utility facilities which are main hurdle in the attraction of investment. It was decided in the meeting that interaction between FPCCI and parliamentarians will be intensified to project the potential of Balochistan.