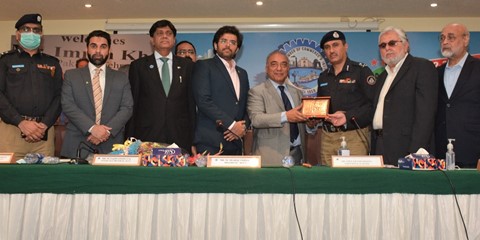 Additional Inspector General of Police Ghulam Nabi Memon has said that Karachi, which was ranked 6th in the list of world’s most dangerous cities in 2013, descended to 64th position last year and was now ranked 109th, signifying the drastic improvement in law & order situation which became possible due to hard work, dedication and sacrifices made by police officers.

Ghulam Nabi, who was flanked by DIG Traffic Iqbal Dara, DIG East Saqib Ismail Memon, DIG South Javed Akbar Riaz and DIG West/ Central Asim Qaimkhani at a meeting during his visit to Karachi Chamber of Commerce & Industry (KCCI), stated that people were no more reluctant to register their cases as 75 percent of the cases were now being reported which was a big achievement and only 25 percent go unreported.

Ghulam Nabi Memon informed that around 15 house robberies were taking place every month in the city which means that a house was being looted on every second day hence effective strategies were devised and strict action was taken to destroy the networks of robbers that resulted in bringing the figure down to just two robberies a month.

Commenting on the appreciation and high expectations expressed by the participants of the meeting, Addl. IGP further said, “We may be slow but we are moving in the right direction and our goal is to make police department entirely a public friendly institution.”

He said that SHOs were being deputed at various police stations purely on the basis of merit which is decided by a committee comprising of all the DIGs who thoroughly review the performance and past record of the police officer being considered for the post of SHO in any area of the city. “Any SHO found guilty of corruption or any other serious misconduct has to face strict punishment and such officers are never deputed at the same position again. They are treated like criminals.”

Addl. IGP said that as response time was very crucial for efficiently dealing with any law & order situation, therefore the service of Police Helpline 15 has been considerably improved to such a level that policemen now respond to any complaint within five minutes after it has been lodged at the helpline.

To improve surveillance, a total of 27,000 cameras have been installed at various locations all over the city while 7,000 more will also be added soon, he said.

Additional IGP agreed to regularly hold meetings with KCCI representatives so that Police-KCCI coordination could be improved and he also consented to form a committee comprising representatives from KCCI and Traffic Police Engineering Department so that business community’s proposals for improving the traffic flow at various roads could be discussed and accordingly implemented.

Chairman BMG Zubair Motiwala, while highlighting the issue of overcrowded jails, stated that it was a matter of grave concerns that the total number of prisoners was four times higher than the jail’s capacity whereas it was a well-known fact that majority of them were undertrial prisoners. While requesting the Addl. IGP to recommend some kind of an effective system to legislators for dealing with the overcrowding issue at jails, Chairman BMG opined that those undertrial prisoners, who have already completed maximum punishment period for their crimes, may be set free and they can attend the court proceedings as usual till they are convicted or acquitted by the court.

He stressed that SHOs and other officials at the police department should be lenient in dealing with those dispute cases between the two parties which were being recommended by KCCI, Site Association of Industry or any other industrial town association. “Instead of immediately filing an FIR and sending them to court, they should listen to our point of view and we can help in resolving such disputes as a mediator”, he added.

He was of the view that the biggest traffic related issue being suffered by Karachi was the violation of one-way traffic rule which was unacceptable therefore, the traffic police officials must take strictest action against such violators.

He also stressed the need to construct the Karachi bypass, which could connect Karachi Port with Liyari Expressway and Northern Bypass so that the heavy vehicle heading to the upcountry could directly land at the highways without disturbing the city’s roads.

Vice Chairman BMG Anjum Nisar underscored the need to equip police department with latest gadgets and equipment for efficiently managing the traffic flow. “Although traffic flow situation has slightly improved as no major deadlock has been reported since quite sometime now but a lot more needs to be done”, he added.

General Secretary BMG AQ Khalil stated that although Karachi’s population was somewhere around 30 million but it was declared around 1.5 million in the last census which was a sheer injustice as it leads to distribution of lesser resources for a city with a huge population. This was the basic reason for all the ills being faced by Karachiites which has to be highlighted at all available platform so that this city could get its due share and resources as per its actual population and contribution to the national exchequer.

President KCCI Shariq Vohra, while welcoming Addl. IGP and other police officials, stressed that KCCI and Sindh Police must move forward together and make collective efforts to further improve the law & order situation of Karachi. KCCI and the entire business community of Karachi highly appreciates all the sacrifices made by police officers to maintain law and order situation in Karachi which was much better as compared to what it had been in the past.

He was of the view that Police Officials at the higher level were excellent and they have been fully cooperating with the business community in getting numerous issues amicably resolved but the lower-level policemen at various police stations were not discharging their duties the same way which shows a clear mismatch within the police department and requires special attention.