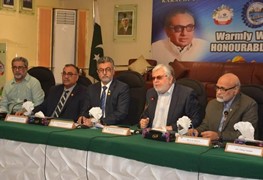 The Leadership of Businessmen Group (BMG) and Karachi Chamber of Commerce of Industry (KCCI), while totally rejecting the unprecedented 80 percent hike in electricity tariff, stated that this unbearable upsurge in electricity tariff has created a miserable situation not only for the public but also for the business & industrial community wherein many businesses and industrial units will close down on their own as it was impossible to absorb such an extraordinary raise in electricity tariffs.

Addressing a press conference here on Monday, Chairman BMG Zubair Motiwala and President KCCI Muhammad Idrees demanded that keeping in view the gravity of situation and likely repercussions on the already ailing economy, the government must immediately withdraw hike in electricity tariff, Fuel Adjustment Charges (FAC) and reintroduction/ increase in Fixed Charges so that the industries could survive in an extremely competitive environment while the hardships being faced by common man could also be reduced in the ongoing era of inflation.

Chairman BMG stated that it was a matter of grave concerns that the base tariff has been raised by Rs9.8972 per unit, which has jacked up per unit cost from Rs19 to around Rs30 per unit, indicating an unprecedented hike of 50 percent. “This is not the end of the story as this increased electricity base tariff of Rs30 per unit will obviously be subjected to 17 percent Sales Tax, Excise Duty and Income Tax as well and when all these components are combined, an unbearable minimum impact in between 65 percent to 80 percent, would appear in the electricity bills”, he noted, adding that if electricity tariffs continue to go up at same pace, the per unit tariff may reach somewhere in between Rs55 to Rs65 in the next couple of months.

Touching upon another important aspect which has raised the cost of doing business for industries, he informed that variant tariffs have once again been restored for the industries under the policy of Peak and Off-Peak Hours which was suspended in the past and a uniform tariff was applicable throughout the day so that the industries could carry on their production at full capacity without any interruption. “The restoration of peak and off-peak hours is going to create a very difficult situation for the industries as they will either have to curtail their production or suspend operations during peak hours and then reengage labour for resumption of pending work during the remaining non-peak hours which happens nowhere around the world but only in Pakistan where such mess usually surfaces due to poor decisions and policymaking by NEPRA which never listens to consumers and only fully facilitates DISCOs.

He appealed the Prime Minister to look into NEPRA’s matters as many decisions taken by NEPRA were purely against the consumers and in recent history, the regulator has never favored the consumers. As consumers’ point of view was never being taken seriously at the so-called public hearing, NEPRA rules must be redefined and a consumer representative must also be included in NEPRA’s penal for Public Hearings.

Expressing deep concerns over restoration and increase in Fixed Charges, Zubair Motiwala stated that this was unacceptable as it would further increase the cost of doing business because fixed charges were applicable as per load on operational and inoperative industries who, instead of being encouraged to reactivate operations, will be compelled to stay closed. “It is an imprudent move which was neither in favour of businesses nor the economy as it would refrain the industrialists from reactivating their closed units. Hence, the government must withdraw Fixed Charges to encourage industrialization and ensure creation of maximum employment opportunities.

Chairman BMG demanded that as the entire country suffers badly due to flash floods and all the cities, villages, highways and markets are completely flooded with rainwater hence in this extraordinary situation, the government should come forward and provide relief by pardoning electricity bills for a period of at least two months with a view to support the affectees during the relief and rehabilitation activities which could last during the next two months or may be more. In this regard, any industrial, commercial or domestic consumer with an electricity bill of less than Rs2 million must be pardoned from payment of bill for two months while the electricity bills of other industries must also be deferred at least for three months so that they could take some sigh of relief and reach a point where they are able to settle their outstanding bills, he said, adding that the deferred bills can be charged later in shape of three equal monthly instalments along with current bill from fourth month onwards which would be widely welcomed as it will minimize the burden on industrialists to some extent.

General Secretary BMG AQ Khalil demanded that as KE’s agreement was about to expire in 2023, the government must look into the possibility of ending KE’s monopoly by unbundling the utility service provider and pave way for more players in the power generation and distribution sector.

President KCCI Muhammad Idrees was of the opinion that this huge impact of around 80 percent in the electricity bills was totally unbearable and unabsorbable by any industry hence, it has to be immediately withdrawn as it was impossible to run any industry at such an inflated cost.

“The industries are already in deep crises because of the devaluing rupee, inflationary trends and eroding buying power of common man whose electricity bills have also been raised higher by at least three times”, he said, adding that neither any industry nor shops or public will be able to bear this burden in the present circumstances.