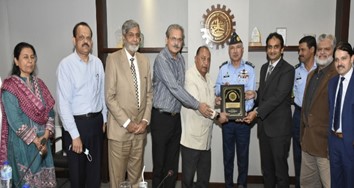 PAF Airmen Academy, Korangi Creek Air Vice Commanding Officer, Air Vice Marshal Nadeem Akhtar Khan said while visiting KATI that due to lack of industrialization in the country, the Pakistan Air Force has to import spare parts. If the local industry, especially with the cooperation of Korangi Association of Trade and Industry (KATI) small parts can be manufactured locally, which will help in reducing the cost of manufacturing jet fighters and other machinery.

Air vice Marshal Nadeem Akhtar Khan said that Pakistan Air Force is successfully developing JF-17 Thunder in collaboration with China in which the cost of aircraft can be reduced if local industrialists cooperate in manufacturing small parts. Ultimately selling the aircraft will not only make the country more profitable but will also develop the industry.

Earlier in his address, SM Muneer, Patron-in-Chief of KATI, said that Pakistan Air Force has made many sacrifices for the security of the country.

Pakistan Air Force made the nation proud by building JF-17 Thunder fighter. It is far superior then F-16 and is considered one of the best fighter jets in the world, it was a matter of happiness that Pakistan was also selling this aircraft, he added.

SM Muneer further said that some elements want to destabilize Karachi economically, if Karachi declined then the whole country will fall victim to economic crisis.

Muneer added that the government is doing well. GDP growth rate of 4% is welcome and it is hoped that it will increase further. Domestic exports are rising, remittances, foreign exchange reserves are increasing while imports also declined, which is pointing to economic growth. “I hope the country can become an Asian tiger in the next few months if we maintain with the current pase of economic growth,” he said.

SM Muneer wished to invite Wing Commander Noman and Squadron Leader Hassan Mahmood Siddiqui, the national heroes of Pakistan Air Force who shot down Indian planes, to KATI and pay tributes to them on behalf of the business community.

Addressing the function, KATI President Saleem-uz-Zaman welcomed Air vice Marshal Nadeem Akhtar Khan on his arrival in KATI and apprised him about the initiatives of KATI.

“The whole world appreciates the professionalism and achievements of the Pakistan Air Force. We are proud of the unwavering courage and sacrifices of our Armed Forces,” he said.

President KATI paid rich tributes to the sacrifices and services of the Pakistan Armed Forces, especially the Air Force.

KITE CEO Zubair Chaya said Defense agencies have made unforgettable sacrifices for the survival and stability of the country. Development of Pakistan starts from Karachi, for building a new Pakistan it is necessary to promote industrialization in Karachi, he added.

Speaking on the occasion, Tariq Malik, Chairman, KATI Defense Coordination Committee, said, “We pay tribute to the sacrifices made by the Pakistan Armed Forces who sacrificed their lives to protect the country.