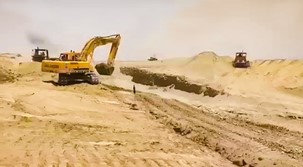 The Pakistan Water and Power Development Authority (WAPDA) has commenced construction work on the extension of the Kachhi Canal following award of the contract and mobilization of the contractors to the sites.

The extension of the Kachhi Canal is being carried out through three different contracts with a cumulative cost of Rs.19.504 billion. Under the works, the existing main canal will be further extended by another 40 kilometers (Km). In addition, 32-Km long water distribution system will also be constructed in the command area to irrigate another 30,000 acres of land in Dera Bugti district of Balochistan. The extension works are scheduled to be completed by August 2022.

WAPDA has already constructed 363-Km main canal and 81-Km long allied water distribution system to irrigate 72,000 acres of land. The canal, with a discharge capacity of 6000 cusecs, that takes off from Taunsa Barrage in Muzaffargarh district of Punjab, enters Balochistan in Dera Bugti district.

Kachhi Canal is a vital project to alleviate poverty and eradicate extremism in remote and backward areas of Balochistan by developing irrigated agriculture and agro-based economy in the province. It is a good omen for Balochistan that the land being cultivated in Sui and adjacent areas of Dera Bugti district through existing Kachhi Canal has brought in a phenomenal change in the livelihood of the locals.