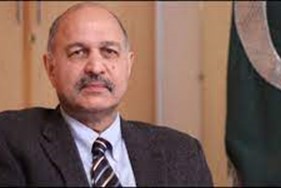 Prof. Kayani welcomed Senator Hussain as a critical figure in recognising and promoting the importance of Pakistan and China’s relationship when the world is witnessing enormous shifts in global policy. Prof. Shah moderated the discussion and highlighted the opportunities and pressing security challenges concerning the China-Pakistan Economic Corridor (CPEC).

While giving a comprehensive overview of the Pakistan-China relationship, Senator Hussain explained that it is not limited to the CPEC flagship project. He spoke of President Biden’s multilateral approach to manage China’s growing influence in the region and globally. In this vein, he highlighted the recently held Quadrilateral Security Dialogue between the United States, Japan, Australia, and India; the G-7 countries are meeting; the US-NATO summit, and the US-EU summit, each of which openly declared China as a global security challenge.

Senator Hussain also referenced the recent interview of Prime Minister Imran Khan with China Global Television Network, which reaffirmed the resolve that Pakistan will not succumb to any external pressure and downgrade its relationship with China.

With its subsequent surge in violence, the US withdrawal from Afghanistan and the stalemate in intra-Afghan dialogue was also discussed by Senator Hussain. He also discussed the CPEC projects that are instrumental in shifting Pakistan’s focus from geopolitics to geoeconomics by boosting connectivity, commerce, trade, and cooperation in the region. He referred to Gwadar Port as the mainstay of the CPEC, which, in the words of Robert Kaplan, Chief Geopolitical Analyst, “has the potential to be the Rotterdam of the Arabian Sea.”

The completion of the first phase of CPEC projects, he explained, had brought monumental changes to previously underdeveloped and ill-utilised areas like Thar. He also spoke of the second phase of CPEC that primarily focuses on agriculture, education, socio-economic development, Special Economic Zones and the relocation of Chinese small and medium enterprises to advance economic and human development in Pakistan further.

He commented upon the growing strategic cooperation between Pakistan and China, where the latter has backed Pakistan’s efforts in the UN Security Council regarding various issues. He also highlighted the common challenge of hybrid warfare that both Pakistan and China face from their adversaries, which can be overcome by dispelling the myths surrounding CPEC.

Senator Hussain concluded by referring to China as a crucial pivot in Pakistan’s general foreign policy and emphasising the tremendous potential of the CPEC in propelling infrastructural and human development in Pakistan. He added that regardless of the challenges, they are surmountable given Pakistan’s strategic space in the region under CPEC and the growing relationship with its neighbouring countries.

Prof. Shah thanked the participants for attending the conference. He reiterated the importance of producing solid academic literature on the subject and holding constructive discourses surrounding CPEC and Pakistan-China strategic cooperation, which remains resilient even in testing times.