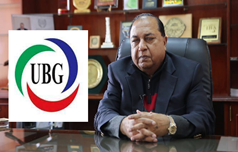 United Business Group (UBG) will likely present concept paper 2021 for improvements in Pakistan’s Maritime sector. Patron-in-Chief UBG S.M. Muneer announced this while appreciating the Prime Minister of Pakistan for choosing the right person as the Special Assistant on Maritime Affairs, Mr Mahmood Moulvi, who is the right individual for this position due to his vast experience and knowledge of the maritime sector, he remarked.

He was optimistic that the combination of Federal Minister for Maritime Affairs Ali Zaidi and SAPM on Maritime Affairs Mehmood Moulvi would, In sh Allah, prove beneficial for improvements in the maritime sector as he is part of the UBG concept – vision for the marine sector of Pakistan.

S.M. Muneer expressed hope that with the joint efforts of MOMA – Mahmood Moulvi & UBG and the guidance & support of Prime Minister of Pakistan Imran Khan, there will be Insha-Allah significant benefits for the country in the maritime sector.

Tariq Haleem, Chairman UBG Standing Committee on Maritime Affairs, Communications & Gwadar Development having rich experience of over 40 years, has pointed out that high demurrage charges in our ports make import expensive. Furthermore, other expenses such as labour-cargo handling costs (example, stuffing / de-stuffing of a container costs about Rs. 12,000/- at KPT whereas the same operation costs half, i.e. Rs. 6,000/- outside the port), have made the ports of Pakistan – i.e. KPT & PQA – the most expensive in the region.

Rationalization of port charges, such as labour-cargo handling costs, an increase of free days and the proper utilization of South Asia Pacific Terminal (SAPTL) at KPT (which has a deep draft of 16 meters alongside berth with option up to 20 meters), can be used most beneficially for making KPT a state of the art transshipment hub. With proper planning and execution, KPT can become the most convenient and cost-effective port for connecting and expanding our trade volumes with CIS countries.

The idea of ‘transshipment’ has been proposed for a long time; this would help attract mother vessels to Pakistan. This is currently not occurring due to excessive port charges etc. We need a new strategy to rationalize port charges, introduce incentive schemes, simplify the Federal Board of Revenue’s transshipment rules and harmonize regulations for the transshipment industry. This will help to transform our seaports into regional transshipment hubs. This should be done with the help of the various stakeholders of our seaports.

Tariq Haleem said that transforming KPT into a transit state of the art facility will also allow us to better connect to countries in the Central Asia Regional Economic Cooperation, a collection of 12 neighbouring countries. SAPTL, with an initial investment of about Rs. 100 billion can, at the moment, be the most suitable instrument in creating a transshipment hub and promoting cooperation with our CAREC partners.

We need to revisit the entire strategy of a transshipment hub; he urged and added we also need continuity at both the ports. Changes, ‘if any, in management during these types of long term planning initiatives may prove disastrous.

“Stock & Sale” traditionally goes hand in hand with transshipment. When Singapore started transshipment activities, Mercedes Benz established state of the art, in-house facilities for Stock & sale for their spare parts etc. Spare parts and other items worth trillions of dollars have been stocked and sold from here.

Malaysia started transshipment activities, and they provided Stock & Sale suitable laws and space; last year, about US$ 3.2 billion cargoes were attracted to Malaysia for Stock and sale.

Hitachi is also carrying out Stock & Sale activities worth billions of dollars at Abu-Dhabi.

For many decades, Toyota is carrying out Stock & sales from Brussels. Toyota’s “Just in time” philosophy has been successful due to this facility in Brussels.

We should create suitable legislation to support Stock & sales so that the business community can promote this concept, hand in hand, with transit trade & transshipment activities.

Today, our transit trade facility is mainly used by Afghanistan only. Some CIS counties have also shown their interest and have started using our ports for transit trade in a small way.

MOMA and MOC should approach all 12 CIS countries and provide suitable facilities with low handling costs for transit trade. It may be noted that imports and exports of these 12 CIS countries are more than about US$ 450 billion. This trade between landlocked countries should be promoted to be routed through Karachi Port and Port Qasim and Gwadar Port when the port is fully operational. This sort of trade volume would mean a movement of more than millions of containers and millions of tons of other general cargoes per year. The capacities of the ports of Pakistan will need to be enhanced on a war footing to handle these high volumes of shipments.

Transshipment laws need to be amended by FBR to permit CFS operations on an urgent basis.

UBG suggests that a standard user CFS station should be made within the KPT, with a minimum area of about 200 acres (with the option to expand as per requirements). This should, preferably, be close to SAPTL so that transportation and handling costs are reduced.

S.M. Muneer said that Khalid Tawab, Chairman Sindh Zone, is also the Honorary Consul General of Mozambique. Due to his relationships in the diplomatic community, he will be starting dialogues with the Ambassadors and Dignitaries of the 12 CIS countries. Other leaders and members of UBG are also in close touch with the diplomatic corps.

Tariq Haleem has already started working on these suggestions. He feels confident that if we work together in a concentrated effort, we can secure maximum cargo volumes through the ports of Pakistan. We must remember that ours is a God gifted geographical location.

If a suitable area of 200 acres or more is available inside KPT to start with, we are confident that transshipment activities will begin in a big way, with Stock & Sale and transit cargoes going hand in hand.

UBG suggests SAPTL terminal for the moment is the advantage of a draft of 16 meters at the terminal and the availability of about 200 acres or more at the “Stock Pile Area” inside KPT. This will provide work for different stakeholders at the ports and jobs for our country’s workforce.

Tariq Haleem said that we have 39 companies with stevedoring licenses, out of which quite a few are sitting idle; an increase in volumes of cargoes will provide opportunities to all of them, Inshallah. In addition to this, ship agency, freight forwarding, logistics, trucking, customs clearing, warehousing and other port-related business will flourish. Overflow cargoes at the ports will also benefit off-dock activity.

President UBG Zubair Tufail said that implementing the UN TIR Convention on transit trade, which is already operating extensively in the Central Asian Republics (CARs), is progressing in Pakistan.

In Pakistan, the traffic is steadily increasing and is expected to continue to grow with the support of all stakeholders under the Customs and Trade Facilitation program, and therefore will serve to enhance our trade with Central Asia, which offers tremendous potential in two ways trade and transit movements for CARs through Pakistan’s ports. This will be further enhanced with new TIR border crossing points on Pakistan’s Western border and the increasing of TIR compliant operators.