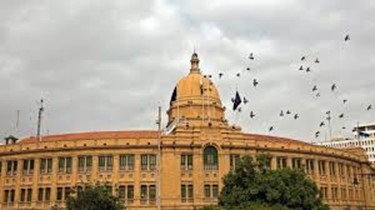 Chairman United Business Group (UBG) Sindh Khalid Tawab (Sitara-e-Imtiaz) who is also past Senior Vice President Federation of Pakistan Chambers of Commerce & Industry (FPCCI) and past Provincial Minister for Industries while talking to the press said, “We are fully supportive of workers getting their just dues. However it is a matter of extreme distress for the Business Community that we are now faced with an increase of 33% labor wages and other incentives by Karachi Dock Labor Board at Karachi Port Trust, which has become affective from 01st May, 2020”.

Khalid Tawab said that to combat and overcome the aftermath of the COVID-19 pandemic, we need to control such types of increases.  In fact the entire government machinery is working hard to reduce / cut down costs and we feel that this increase by KDLB will be the only example of increase in the country.

The business community is of an uniform view that this increase would not be justified even in normal circumstances due to the fact that:

(a)    Any annual wage increase in a trade agreement must always be based on the prevailing Inflation rate which is presently expected to go down to around 6-7% and in fact overall economy is heading into a recession. (b)   KDLB already has a reserve fund of over PKR 3 billion which has not yet been invested in the welfare of the labor or disbursed towards their immediate needs – the basic argument for increase as demanded by KDLB. This reserve should be utilized by KDLB to support their fiscal requirements in terms of labor wages and subsidies “if required”. (c)    If a comparison is made with port labor wages of other ports in the region, Pakistan stands as one of the highest and costly ports (the labor wages keep on increasing indiscriminately every 2 years -usually under threat of potential port shut down). (d)   Port labor wages of KDLB at KPT are about four times higher than the industrial labor in Pakistan doing similar hard work in local mills and factories. Why should such disparity in wages be allowed to go undisputed is mind boggling.

Some facts about KDLB workers at Karachi Port Trust:

There are about 2,700 workers of Karachi Dock Labor Board but more than about 70% are paid wages without doing any work.

For many cargoes being handled at Karachi Port Trust wages are paid to Dock Labor Board workers without getting any services from them in fact private labor has to be engaged to perform the required services of loading unloading of cargo from the ships at Karachi Port Trust, which means that wages have to be paid two times on cargo handled at KPT.

Even today without the new expected increase each worker receives wages of more than Rs. 50,000/- per month + allowances.  Average about Rs. 16.5 crores per month is paid out in only wages and incentives for 2,700 dock workers of KDLB at Karachi Port Trust.

Plus the medical bills for the workers of Karachi Dock Labor Board are more than Rs. 3 crores per month.

To add to the woes of the business community at normal times, as things stand today, the pandemic COVID-19 has literally put our economy on ventilators. Lockdown is since 18th March and likely to continue the whole of May, means a loss of trillions of rupees and daily wages labor, also  mills, factory and other labor outside the port area need prior attention instead of draining money in KDLB Wage increase at KPT. We are still not clear what the affects of COVID-19 fallout will be in the country.

GOP is struggling hard to cope with this economic crisis, and aiming to bring the inflation rate down to about 6-7percent. Quick recovery in the economy will be completely dependent on keeping our production costs, especially the labor cost to same levels as existing and try to save every rupee possible.

Hence it is requested on most urgent basis that an increase of 33 pct in wages demanded by KDLB should be revisited.  Relevant govt. ministries should be requested to intervene, take up a comprehensive review of the situation, and the KDLB Wages frozen to existing level, till such time as the economy comes back on a progressive track and overall comfortable economic stability achieved.

The corona virus COVID-19 pandemic has pushed the world into a recession. For 2020 it will be worse in GDP growth especially for developing countries. The economic damage is mounting across all countries, including Pakistan due to the massive health crises.

It is not an appropriate year for such exorbitant increase in wages at this time of national economic crises.

Furthermore, the dock labour’s wages at KPT are already very high as compared to the wages of labours in other industrial sectors in the country.  The wage scale of dock labour should have uniformity with the labour wages of country’s industrial labour wages.

Overall, the dock labour wages rules and policy need to be re-addressed and revised in order to manage rising costs to country’s trade and at the same time implement “ease of doing business” policy of government.  If revisited, reviewed and brought down as per the market levels / norms of wages in the country then reduction of cargo handling costs for both containerized cargoes and bulk cargoes export and import at Karachi Port will result in substantial savings to the business community.

In short following steps need to be taken on an urgent basis: