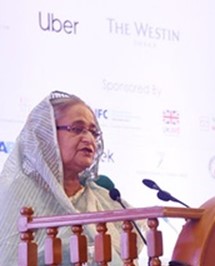 Both fairs inaugurated separately in a colourful event, according to organizer.

Prime Minister Sheikh Hasina in her inaugural speech, said the government will set up two more leather industrial parks in Chittagong and Rajshahi for unlocking the huge potentials of the country’s leather sector if her party is re-elected in the next election.

Later, the Prime Minister opened the exhibition and visited its different pavilions.

The organisers said in the build-up to the event that they were expecting more than 300 exhibitors from 20 countries, with dedicated pavilions for companies from India, China and Pakistan.