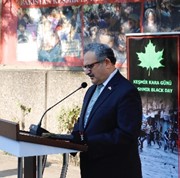 Turkish support for Jammu & Kashmir dispute was once again reiterated at an event was organized by the Embassy of Pakistan in Ankara today as part of Kashmir Black Day commemorative ceremonies.

Pakistani leadership reiterated Pakistan’s political, moral and diplomatic support to the people of Kashmir until the resolution of the Jammu & Kashmir dispute according to the aspirations of the Kashmiris as per the United Nations Security Council resolutions.

Mr. Ali Şahin, Chairman of Turkey-Pakistan Friendship Group in Turkish Parliament, in his speech reiterated Turkish support for the oppressed people of Indian Occupied Jammu & Kashmir. He said the people of Turkey are concerned at the situation in Jammu & Kashmir. He said India claims to be world’s largest democracy but it has perpetrated worst kind of atrocities in Kashmir over the last seventy-two years. Kashmir is an issue of honour and a red line for Turkey and so it should be for the Muslim Ummah, said Ali Şahin.

Pakistan Ambassador Muhammad Syrus Sajjad Qazi in his remarks expressed deep gratitude to the people and leadership of Turkey for their support for the oppressed people of Indian Occupied Jammu & Kashmir. Ambassador said Kashmiris are fighting for their inalienable right to self-determination for more than seventy years. The just struggle of the Kashmiri people would soon succeed Inshallah, he added.