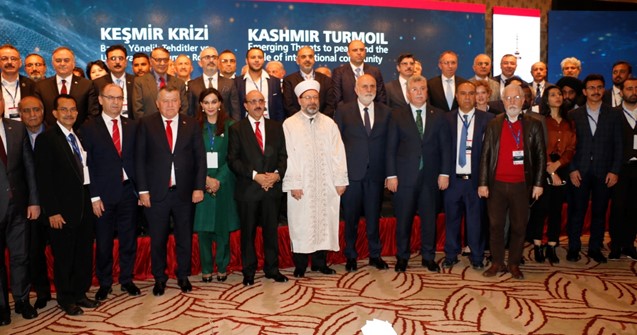 President of Azad Jammu & Kashmir, Sardar Masood Khan, has reiterated the call on the international community to end the ongoing atrocities in Indian Occupied Jammu & Kashmir (IOJ&K), upholding the inalienable right to self-determination of the Kashmiris in accordance with the UN resolutions.

President Sardar Masood Khan made these remarks as the chief guest at the inaugural session of the two-day international conference on Jammu & Kashmir conflict being jointly held by Lahore Center for Peace Research and Institute of Strategic Thinking in Ankara under the theme: “Kashmir Turmoil: Emerging Threats to Peace and Role of International Community.”

Message of the Speaker of the Turkish Grand National Assembly, Mustafa Sintop, was also read on the occasion.

In his statement, President Masood Khan gave the following messages:

The President of Azad Jammu & Kashmir expressed his deep concern at the prevailing human rights and humanitarian situation in the Indian Occupied Jammu & Kashmir where nearly 9.5 million innocent Kashmiris continued to endure a collective blockade for the past 108 days. He added that events being witnessed in IOJ&K, according to the Genocide Watch, were different stages of genocide.

He emphasized that the illegal and unilateral steps taken by India on 5 August 2019 in IOJ&K were an attempt to re-occupy and re-colonize the Kashmiris’ land in violation of the UN Charter, relevant UN Security resolutions, and the Geneva Conventions. Likewise, India’s announcement on 31 October to divide the state of Jammu and Kashmir, redraw its boundaries and issue fake maps were not only a violation of international law but also a blatant infringement of the rights of the Kashmiri people. All these steps had been rejected by the Kashmiris emphatically, the underlined.

President Masood Khan asked: “Are Kashmiri Muslims’ lives expendable? Are they not citizens of this planet? Are Kashmiris orphans of the global family? Do they not have right to defend themselves?”

He emphasized that the rise of right-wing Hindu extremism in India in the form of Hindutva ideology was threat not only to all minorities in India but also to the regional peace and security owing to the jingoistic statements and nuclear threats by the Indian leadership.

He added that the people of Pakistan were determined to defend every inch of their homeland by all means against any threat. Any miscalculation by India would be costly for it, for the region and the world, he stated.

President Masood Khan expressed the deep gratitude of the people of Jammu & Kashmir to President Recep Tayyip Erdogan for resolutely advocating a resolution of the Jammu & Kashmir dispute through dialogue, as well as for Turkey’s principled stance on the issue. Recalling the historic Pakistan-Turkey fraternal relationship, he said that support for the Kashmir cause existed at all levels of the Turkish society and was a source of great solace for the oppressed people of IOJ&K. He also thanked Turkey for its invaluable contribution towards the reconstruction efforts in Azad Kashmir in the aftermath of the devastating earthquake in 2005.

President of Azad Jammu & Kashmir also invited the participants of the conference to visit Azad Kashmir “where we have nothing to hide and lots to showcase.”