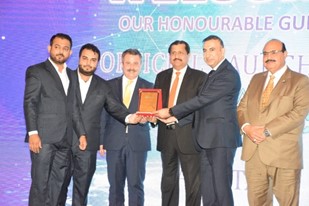 The boom in the construction industry of Pakistan provides an excellent opportunity for prospective Turkish investors to invest and launch joint ventures with Pakistani businesses. This was stated by Turkey’s Consul General in Karachi, Tolga Ucak, while speaking as the chief guest at the launching ceremony of the Turkish company, Beta Electric, here at a hotel. Honorary Consul General of Yemen also addressed the ceremony, Mirza Ikthiar Baig, Chairman of Consumers’ Association of Pakistan, Kaukab Iqbal, CEO of A-T Electricals, Tanzeem Taj, A-T Electricals Director Aamir Ahmed, CEO of Beta Electric, Huseyin Konar.

The Turkish diplomat said that based on his over three years’ stay in Karachi, and he had concluded that the city provided tremendous opportunity to do business, so much so that sky is the limit when one is present in Karachi and plans to do anything.

He said that Turkey had very deep heart-to-heart economic, cultural, and political relations with Pakistan. He told the history of Pakistan-Turkey ties dated back to the Khilafat Movement and the Turkish War of Independence. People in this region had extended tremendous help to their Turkish brethren doing the struggle to save their country.

He said that bold steps were required in the economic and business fields to get the maximum benefit out of the historical and close relation between Turkey and Pakistan.

Turkey’s Consul General said the Turkish companies shouldn’t just only invest in Pakistan and start joint ventures with the Pakistani companies to start manufacturing in the country.

He said the latest joint venture was a perfect example of jointly setting up such a business by a Turkish and Pakistani company. Its success meant the success of both Turkey and Pakistan.

He said that Turkey had been issuing 400 visas daily alone from Karachi as Pakistanis were no longer required to go to Europe and America for recreation and leisure.

He said the newly launched joint venture between Pakistani and Turkish companies was the best example to promote the local manufacturing and assembling industry.

The Chairman of the Consumers’ Association of Pakistan, Kaukab Iqbal, said that the new business venture would promote brotherly ties between Turkey and Pakistan.

CEO of A-T Electricals, Tanzeem Taj, sad that it was indeed an immense honour for them to introduce Turkish electrical products in the Pakistani market that were of world-class standard.

He hoped that Pakistani consumers and traders would perform their due role to make Turkish electrical goods successful in the local market.

He said that consumers in Pakistan had trusted his company’s products for the last 30 years as the public would show the same level of trust in the case of newly introduced Turkish appliances.