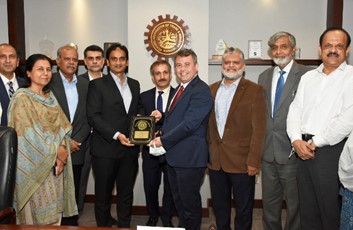 Consul General of Turkey Tolga Ucak on a visit to KATI said that Turkey and Pakistan has excellent relations and this should be reflected to economic and trade relations. Turkish companies are interested in textile and food items. Pakistani investors should look for investment opportunities in Turkey, during his address in Korangi Association of Trade and Industry (KATI) President Saleem-uz-Zaman, Rashid Siddiqui, Senior Vice President Zaki Ahmed Sharif, Vice President Nighat Awan, Gulzar Firoz, Johar Qandahari, Syed Farukh Mazher, Tariq Malik and others were also present.

Turkish Consul General Tolga Ucak called for enhancing business-to-business relations between the industrial communities of the two countries. He said that business has been affected due to Corona, lockdowns, and travel ban for the last two years, but gradually the number of Corona cases is decreasing and the process of vaccination has accelerated. Hopefully, we will get rid of it this year.

The Turkish Consul General further said that the two countries would extend all possible cooperation in enhancing contacts especially investors in textile, food, and other sectors. He mentioned that he has an old relationship with KATI and is happy to visit for the fifth time.

Noting the importance of KATI, Consul General said that KATI’s industrialists and exporters are a great force and Turkey wants to make full use of them. He said that Turkey has developed rapidly in a short span of time and as a fraternal country wants Pakistani investors to benefit from the world’s 13th largest economy in terms of GDP. Turkey has set up industrial zones for Pakistani investors where the government offers numerous facilities.

Earlier, KATI President Saleem-uz-Zaman welcomed the Turkish Consul General to KATI. He said that Turkey and Pakistan have a rich history of fraternal relations. Saleem-uz-Zaman said that Pakistan has a conducive environment for investment and there are ample opportunities for Turkish investors. He said that KATI is one of the leading industrial areas of Karachi and Turkish investors can easily set up an industry here in which Kati would play its role in providing them all facilities.

There has been innovation in textile and food machinery in Turkey and Pakistani industry could benefit from it. Pakistan imports machinery from China but it is easy to import machinery from Turkey, he added.

Rashid Siddiqui, Chairman of KATI’s Committee for Diplomatic Relations called for holding international exhibitions to promote trade between the two countries. He said that a delegation of KATI industrialists and delegations of Turkish and Turkish investors should visit Pakistan so that bilateral Opportunities can be explored.

On the occasion, Turkish Commercial Attache Eyyup Yildirm gave details of the prospects for trade relations between the two countries. Briefing the KATI Officials, the Commercial Attach stressed that Turkey has achieved rapid economic growth in the last 10 years, today Turkey’s GDP is the fastest growing in the region, and soon Turkey will become a major economic power. He said that Turkey’s location is very important and access to European, Asian, and African countries is very easy. He also highlighted the importance of the upgrading the industry to achieve international competition and also informed about the Turkish machinery sector’s competitive advantages.

Rahim Albayrak, UAE Country and Regional Representative of the Investment Office of the Presidency of the Republic of Turkey, attended the event via an online link from Dubai and briefed KATI officials on investment atmosphere of Turkey, incentives on industrial zones and related opportunities in Turkey and responded to their queries. While in more than 300 industrial zones, the government is giving other benefits including tax exemptions.