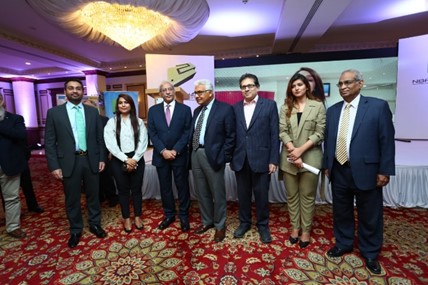 Non-Banking Financial Sector & Modarabas must oppose and take head on the Sales Taxes imposed on NBFI & Mobarada companies considering them as services sector by the Government of Sindh in its Budge, this sector is only providing financial support rather than services as assumed by the Government. Whereas the Regulator are not observing their true power as laid in 1913 Act, this was stated by the Chief Guest Mr. Khalid Mirza, Chairman, Policy Board, Securities & Exchange Commission of Pakistan on the occasion of unveiling the Year Book – 2018 of NBFI & Modaraba Association of Pakistan on Monday the 24th June, 2018 which was attended by senior officials from SECP, Pakistan Stock Exchange, State Bank of Pakistan, NBFI & Modaraba Sector and Executives from other financial sector.

He further added that NBFI & Modaraba help attain the objective of macroeconomic policies of creating more jobs in the country by promoting SMEs. He said that the Small and Medium Enterprises requirement and their volume the revenue of PKR 94 Billion available by NBFI & Mobaraba Association will not cater SME need. We have to increase the available revenue to meet the requirement drastically.

Earlier Mr. Raheel Q. Ahmad, Chairman, NBFI & Modaraba Association while welcoming the Chief Guest and others, said that the core business of NBFI & Modaraba Sector is SMEs which is a backbone of Pakistan economy as this sector plays a significant role for economic development in the country. He said that NBFI & Modaraba Sector is an active financier of SMEs and it has disbursed over PKR200 B in the last ten years. The total number of investors in PSX is 231,793 whereas the NBFI & Modaraba sector have 86,473 investors which comes to 37% of it. The sector has paid to their shareholders PKR10B during the last ten years. Our focus is on the creation of Employment, Financial inclusion, women empowerment. SME Financing.  We have repeatedly raised our voice at different forums to include the NBFI & Modaraba Sector in all the concessional schemes introduced by State Bank of Pakistan for SMEs so that the sector may play its due role in the growth of the SME sector.

Ms. Mussarat Jabeen, Executive Director, SECP read the message from Chairman SECP Farrukh H. Sabzwari and said that Leasing companies and modarabas from an important part of the Non-Banking Financial Sector and believe that by developing a strong NBF sector we will not only promote savings by offering different asset classes to the investors but also provide alternative fund raising opportunities to the participants of the financial system. She added that that total assets of the leasing sector stand at PKR 10 billion, whereas the Modaraba sector is PKE 53 billion. This means that the total size of the leasing and Modaraba sector in Pakistan is approximately 0.18% of GDP, which is dismal.

In the said ceremony Best Performance Awards were also given to the best performers of the NBFI & Modaraba Sector during the year ended 30th June, 2018 by the Chief Guest. ORIX Leasing Pakistan Limited was adjudged the best performer and acquired first position while Allied Rental Modaraba Secured second position. ORIX Modaraba and First Habib Modaraba were declared joint winner of the third position.

In conclusion, Mr. Basheer A. Chowdry, CEO Trust Modaraba and former Chairman, NBFI & Modaraba Association thanked the Chief Guest, senior officials of SECP, all CEOs of Leasing Companies, Modarabas and Invest Finance Companies and other dignitaries for participating in the launching ceremony of the Association.