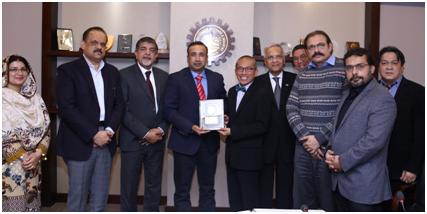 Mr. Chauvachata said that Thailand already importing Pakistani Seafood on large scale, trade volume could expend in other sectors also. He told that Thai people have great respect and love for Pakistan and this relation could turned into strengthen economic bond. He added that to enhance trade volume between the both countries many efforts were underway.

President KATI Dainsh Khan briefed the CG about economic significance and production capacity of Korangi Industrial Area. He said that new visa policy announced by The PM Khan provides a great opportunity to investors. He further said Pak-Thai friendship could be more strengthen by expending economic cooperation. He noted that Livestock and Dairy were unexplored sectors by Thai buyers and investors, it should be come under consideration.

Masood Naqi said that to enhance bilateral trade and economic relations there is need to build people to people contact accessible. He mentioned that as an agricultural country Pakistan can fulfill the food, vegetable and fruit needs of Thailand.ZubairChhaya suggested that to expend trade volume list of items should be shared.