Skip to content
Home » Technology & collaboration with stakeholders must be used to curb crime: IG Sindh 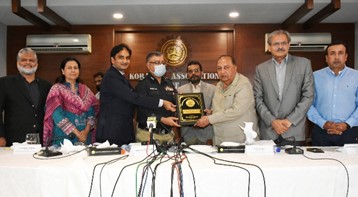 Inspector General of Police Sindh Mushtaq Ahmed Maher while acknowledging the incidence of street crime has increased in Karachi, there has been a spate of street crime incidents all over Sindh including Karachi. Technology must be used with cooperation of stakeholders and business community. IG Sindh claimed that Kashmore has been cleared of crime and operation is underway in Kachha. Addressing members of Korangi Association of Trade and Industry (KATI). KATI Patron-in-Chief SM Muneer, President Saleem-uz-Zaman CEO KITE Ltd Zubair Chhaya, Chairman Law and Order Committee Danish Khan also addressed the occasion.

Additional IG Karachi Imran Yaqub Minhas, DIG Traffic Iqbal Dara, DIG East Noman Ahmed Siddiqui, SSP Korangi Shahjahan Khan, SSP Traffic Korangi Latif Ahmed Siddiqui, SP Landhi Shahnawaz Chachar and other police officers were also present. IG Sindh Mushtaq Maher said that 28 to 30 youths of Sindh Police have been martyred, assistance of martyrs is being provided from police funds, we have also included private sector in Police Welfare Board and we want a representative of KATI to be included in the board.

He said that the rate of street crime in residential and industrial areas of Karachi has definitely increased, but to curb it, the police with the support of industrialists have to use modern technology. IG Sindh Mushtaq Maher claimed that the operation in Kacha has not stopped. The impression is wrong and the operation is going on in Kacha area while Kashmore district has been cleared of crime. On the recent incident at Clifton police station, he said that such incidents tend to happen. However, this incident is being investigated.

SM Muneer said that a fund should be set up for the martyrs of the police. We have also deposited money in the funds of the martyrs in the past. There is a need to control street crime in Karachi, he said that the budget of the federal government is business friendly, the decisions will improve the economy with good results, adding that Karachi pays the highest taxes and donations.

Korangi Association of Trade and Industry President Saleem-uz-Zaman said that law and order situation in Karachi has improved, street crime has increased which must be controlled, Korangi Industrial Area is the economic backbone of the country. 78% of the country’s oil demand is met from this area, if Korangi Industrial Area gets closed, the whole country will also shut down, this area has its own importance, and major textile exporters of the country are in Korangi Industrial Area. Danish Khan, chairman of the Standing Committee on Law and Order, said that helmets should be banned again for motorcyclists and side mirrors should be installed to prevent accidents. He said that the country’s exports had set new records this year due to better law and order situation, we achieved record targets even in difficult conditions. Karachi has a population of more than 30 million and contributes 54% of the country’s exports, street crime due to unemployment. Zubair Chhaya said that the incidence of street crime is also increasing in KATI area including the entire city. Due to lack of mass transit plan, people come in on motorcycles and loot away. Having so many motorcycles has also increased theft. The martyrs of our police had restored the colors of this city by making sacrifices. The problems of Mehran Town have been overcome. Karachi has seen a very bad time. All the trucks of raw materials kidnapped and disappeared. The worst traffic jams in Korangi industrial area, parking mafia is a major cause of traffic jams, Dhaba hotel and Jhugi hotel are hotbeds of crime which should be eliminated, FIR should be registered against those coming in wrong direction, in Korangi there is a shortage of 300 to 350 police personnel. If the manpower is met then the situation will improve.