Skip to content
Home » Supply of electricity, gas and water should be ensured in the NTR industrial zone, Faraz-ur-Rehman 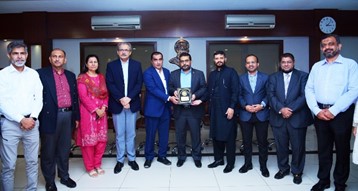 CEO of GFS Builders and Developers Irfan Wahid has said that NTR is preparing a package to provide plots at a discounted price to members of KATI in the second phase of the industrial zone. Where investors and industrialists will be given possession on payment of 50 percent, the remaining 50 percent can be paid in easy installments. He expressed these views during his visit to the Korangi Association of Trade and Industry (KATI). KATI President Faraz-ur-Rehman, KITE Limited CEO Zubair Chhaya, Senior Vice President Nighat Awan, Vice President Muslim Mohammadi, Former President Farhan-ur-Rehman, NTR Industrial Zone Director Aslam Mian Noor and other members were also present.

Irfan Wahid, CEO of GFS Builders said that the second phase of the industrial zone has been approved by the concerned authorities and industrialists will be given possession on easy terms. He said that as promised, possession of 1000 yards plots of the first phase is ready to be handed over within the stipulated period. Irfan Wahid said that Bank Islami has shown interest in the project and industrialists can easily buy plots by getting loans from Bank Islami on easy terms.

CEO, GFS said that KATI and we are like a family and its credit goes to Farhan-ur-Rehman. He said that the work of KATI Park was delayed which is regrettable, but the project will be completed on Kashmir Day, February 5th.

Earlier, KATI President Faraz-ur-Rehman said that an uninterrupted supply of necessities like electricity, gas and water is indispensable for any industrial area. In this regard, it should be ensured that all facilities are provided to the industrialists in the GFS NTR Industrial Zone. Faraz-ur-Rehman said that KATI will fully cooperate with GFS in the NTR industrial area. He said that it is very important to focus on industrialization in the country and GFS is the only builder who laid the foundation for the establishment of industrial zones keeping in mind the need of the industrialists. President KATI said that Karachi is the economic hub of Pakistan and establishment of an industrial zone here is pleasant. He said that GFS should prepare a special discount package for the members of KATI.

Pleased that plots in NTR Industrial Zone are available at low cost which is very important for industrialists.

Zubair Chayya, CEO KITE Limited, said that GFS Builders has always supported KATI’s CSR campaign. The relationship between KATI and the GFS is very strong. He said that the price of plots in other industrial areas of Karachi is skyrocketing due to which industrialization is not being promoted. And there is a dire need for small and medium enterprises including cottage industries to flourish in the country. Zubair Chhaya said that KATI’s Park is our dream and we want that project to be completed soon so that more facilities can be provided in Korangi Industrial Area.

On the occasion, NTR Director Aslam Mian Noor said that the project consists of two phases, in the first phase there are plots from 125 yards to 1000 yards for which the infrastructure is ready. While the second phase covers 400 acres which is close to the CPEC project. He said that to solve the energy problem, an agreement is being made with a Chinese company which will provide electricity there through solar energy. He said that the cost of an industrial plot in Korangi is Rs 3 lakh per yard while we are giving plots to industrialists at NTR for just Rs 25 thousand per yard. Industrialists can get possession of the plot by paying 50 percent and the facility of paying the remaining amount in easy installments will also be provided.