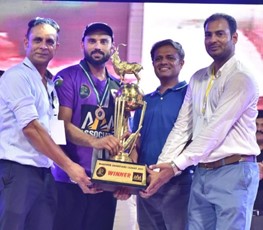 AAA Markhor champion league, Pakistan’s most distinguished Tape Ball Cricket tournament, concluded in Jinnah Stadium Gujranwala, in which Striking Panther beats Eagle Eye in the final match to pull off the most coveted trophy. The Chairman of AAA Associates, the lead sponsor of Markhor Champion League, Mr. Shaikh Fawad Bashir distributed prizes among the best performers of the tournament.

Eight Teams entered into a fierce competition to win the Trophy. The winning team, Striking Panther was awarded with prize money of 3 million Rupees and the runner up team, Eagle Eyes was awarded with cash prize of 1 million rupees. The title of The Player of the Tournament was conferred on Akbar Poli, who made 247 runs on the score board by striking a haul of 31 sixes. Ahmad Kulfi was proclaimed as the best bowler of the tournament for pulling off 10 wickets. Nasir Pathan was declared the player of the match as he trumpeted the highest score in the final battle between Striking Panther and Eagle Eyes.

Markhor Champion league, being consecutively successful for two years, has gained the status of the most distinguished Cricket Champion League, after Pakistan Super League (PSL). This tournament is also endorsed by Punjab Sport Board to promote professional cricket at grassroots level. It provides an opportunity to the emerging talent of Pakistan to participate at national level tournaments. Teams from all across Pakistan participate in this tournament with great enthusiasm to showcase their talent which can later be utilized in national and international tournaments.

The Chairman of AAA Associates, Mr. Shiekh Fawad Bashir commended the efforts put by the management of the tournament and the enthusiasm of the participating teams by saying: “It was an exciting experience to see the potential and talent of the young players. These tournaments offer great opportunities to fresh players to explore and carve out their space at national and international arena.”

The Managing Director of AAA Associates, Lt. Col (Retd) Shahzad Ali Kiani shared his thoughts: “Tape ball Cricket is a widely played sports format at grassroots level, which enables young players to groom their talent for the bigger tournaments. AAA Associates believes in building communities with strong foundation to achieve their dreams. Sponsoring Markhor Champion League is a step towards our goal of developing professional foundation for rising cricket stars, who can further embark on the journey of a bright future of cricket in Pakistan.”

AAA Associate has long been supporting various sports event which are contributing toward nation building process and promoting sports culture among youth. As part of their corporate social responsibility, AAA will continue to extend support in developing sports facilities across Pakistan and sponsoring sport events in order to project the potential of Pakistani youth at both national and international platform.