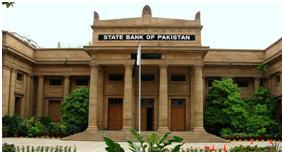 State Bank of Pakistan released its Annual Report on the State of Economy for the year 2015-16 today. According to the Report, Pakistan’s economy maintained its momentum towards a higher growth trajectory in FY16, as higher infrastructure spending by the government and decades low interest rates provided a boost to domestic demand. Side by side, improvements in energy supply and the security situation also supported this momentum.

The Report further explains that though some macroeconomic indicators were short of targets, they still posted better performance over the last year. For instance, real GDP growth of 4.7 percent during FY16 was below its target, but nevertheless higher than the growth achieved a year earlier. Meanwhile, the accumulation of the country’s foreign exchange reserves reached an all-time high level at end FY16; the exchange rate remained stable; and CPI inflation fell to only 2.9 percent during the year. Similarly, fiscal consolidation remained on track, and the budget deficit was reduced to 4.6 percent of GDP – the lowest since FY07.

Notwithstanding these positive macroeconomic stability gains, the Report highlights some challenges as well. Firstly, the current level of private investments and savings in the country needs acceleration to keep pace with required investible resources. Secondly, structural issues in the export industry need to be resolved. Thirdly, the reliance of the tax system on stop-gap measures is creating distortions in the economy. Finally, the country needs to spend more on social sector development to address social issues.

The Report, however, views Pakistan to be well positioned to address these challenges. It anticipates all-important support coming from a stable macroeconomic environment and growing investments in CPEC-related projects. These would help improve the existing infrastructure and power supplies to businesses.

As for the short-term economic outlook, the Report recognizes the positive impact of improved macroeconomic environment, better energy supplies, and subsiding security concerns. In addition to CPEC, economic activity would benefit from pro-growth policies: the policy rate currently stands at a historic low of 5.75 percent, which has made funding easier for businesses and consumers. Similarly, growing development spending, despite a planned reduction in budget deficit, would continue to support infrastructure-related industries.

Given this backdrop, the government envisages a GDP growth of 5.7 percent for FY17. At the same time, the current account deficit is likely to stay in the range of 0.5 – 1.5 percent of GDP during the year. In this context, the Report draws attention to the IMF program’s contribution in restoring macroeconomic stability and confidence of international creditors. Crucially, it maintains that the reform process – related to energy-sector, loss-making PSEs (like PSM, PIA), and business-friendly regulations – must continue after the IMF program’s completion. Finally, the Report reiterates that without private sector participation, it will be hard to achieve a higher and sustainable growth that is built on the pillars of entrepreneurship, innovation and competitiveness.