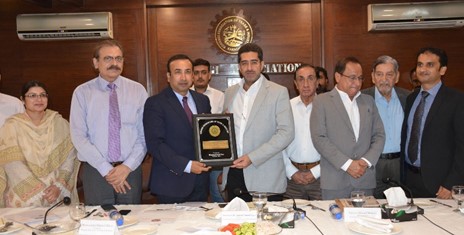 The minister said that climate change never been considered as an issue in our country and there is urgent need to address this. He said that a dedicated department would be established to address and respond on climate change. Mr. Talpur said that CM Sindh Murad Ali shah and his minsters are working on the vision of Chairman PPP Bilawal Butto Zardari. He also said that Sindh Government is working to improve solid waste management in Karachi. He told that requirements of staff would be provided to SEPA.

President KATI Danish Khan said that including KSWB, KMC, DMCs all institution should collectively work to improve environment. He showed concern over increasing pollution in the sea and said that government has asked to establish an effluent treatment plant for each industrial unit. He said it is impossible to bear the cost of ETP for each unit as ETP unit costs more than Rs.120 Million each and it will increase cost of doing business which would directly affect our competiveness potential in international market. He urged that combine ETP is the only solution and 5 of these plants would start working soon in Karachi.

DG SEPA told the meeting that due to less plantation and other factors climate change has become a challenge for us. He said that pollution on costal belts causes drastic effects on marine life. He told that Karachi produces 12 tons solid waste a day, 50 pc of that burned. Zubair Chhaya said that despite repeated warnings and legal action dumping and burning at Malir river bed didn’t stop, it is harming environment. He also showed dissatisfaction on the performance of KWSB.