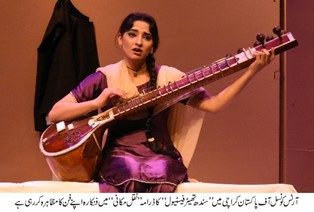 The hall of the Arts Council had been filled with people.”Naqal-e-Makani” was translated from the Urdu language to the Sindhi language. The play was highly enjoyed by the audience. The play takes viewers to a social satire plot, set in an environment of the early twentieth century. The satirical theme was that the money and economic well-being is more important than all moral and social values!

The play starts when a migrant takes a room on rent in a covered area of the city. The flat was in use of a famous woman before, who was a singer and dancer and thus the newly shifted husband and wife face the people who used to visit that woman when she was living there. The end of the play was very tragic when the husband just got done with the visitors and tired and he demanded his wife to sing a song for a rich man who used to visit their house and staying there for some time to listen to a song, he was actually out of his min. The on-going Sindh theater festival will last till 18 of November that includes 20 Urdu and Sindhi Plays.

Meanwhile, with the collaboration of Sindh culture department, Arts Council of Pakistan Karachi is going to stage a Sindhi Play “Chehro Chehro Aaino” in Sindh Theater Festival on the 9th of November 2018 at 7:30 PM on Friday at Arts Council Auditorium Karachi. The play will be directed by Naaz Sahito where famous artists of the country will perform in the play.