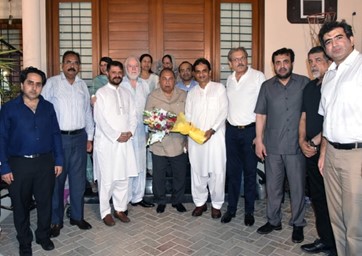 The provincial government under the leadership of Chief Minister Sindh is paying special attention to the improvement of infrastructure in the province, especially in the industrial areas. Earlier, Sindh government in collaboration with the Industrial Development Board has carried out development works in which funds have been released to the industrial associations and steps are being taken to provide more funds in the future so that the government and the industrial associations. Together they can work for the betterment of industrial areas, this was stated by Minister for Industries and Commerce Sindh Jam Ikram Dharijo while addressing a dinner hosted by Korangi Association of Trade and Industry (KATI) President Saleem-uz-Zaman in honor of UBG Patron-in-Chief SM Muneer. KATI & UBG officials, former presidents/chairmen of KATI, members of the executive committee, industrialists and others dignitaries were also present on the occasion.

The Minister said that the suggestions given by the industrialists would be reviewed and made effective. We are trying to implement the establishment of new industrial zones so that the process of industrialization can be promoted, he added.

Addressing the function, Patron-in-Chief KATI & UBG SM Muneer said that the federal government had presented a balanced budget and now the Sindh government was expected to present relief to the business community and the people in the budget. The current budget is good and balanced overall.

SM Muneer said that the efforts of KATI President Saleem-uz-Zaman are commendable, he is playing significant role in highlighting the problems of industrial areas by working day and night.

SM Muneer said that the Government of Sindh was making efforts to solve the problems faced by the business community in collaboration KATI. He further said that if GDP reaches the level of 4.8, it will be a great achievement for the economy.

Recently, vaccination facilities are being provided to the employees of Korangi Industrial Area in KATI, which is benefiting a large number of industrial employees.

KATI President Saleem-uz-Zaman said that SM Muneer is an asset of the country, his services are commendable and under his leadership KATI is serving the business community.

Saleem-ul-Zaman added that with the help of the Sindh government has setup Corona Vaccination Center in KATI, where more than 400 industrial workers and others are being vaccinated. “We are trying to extend the vaccination process to industrial units, especially those with a large number of employees,” he said.

The President said that the combined effluent treatment plant, which is also need of the industries, In view of its usefulness, its construction should be expedited and completed on priority basis as soon as possible.

Speaking on the occasion, Zubair Chhaya, CEO KITE Limited, said that he was in constant touch with the provincial government for the development of industrial areas and was implementing KATI’s suggestions. He said that if the Sindh government allocates the responsibilities of doctors for Corona Vaccination Center, then the industrialists of KATI are ready to bear their expenses.

Zubair Chhaya further said that under the leadership of SM Muneer we have worked day and night in the service of the business community which is why KATI is considered as one of the largest industrial and major areas in Karachi.