Skip to content
Home » Sindh Chief Minister graced the oath-taking ceremony of office bearers of the Arts Council of Pakistan. 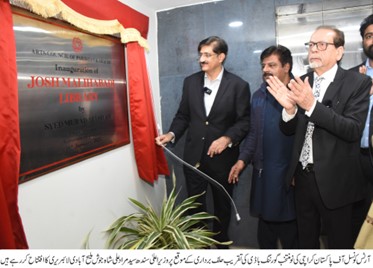 Sindh Chief Minister said that Ahmed Shah had brought together literary people at local and foreign levels; the government will continue to patronise the Arts Council as it has become a center of the great facility for institutions. Arts Council Karachi has played a big role in restoring the city’s splendour; he said it was a pleasure to see Josh Malihabadi Library; it is a very big library; I congratulate Ahmed Shah for this. On this occasion, he congratulated the peaceful local elections. He said it could not have been a fairer election that took place, and no major accident happened because the government had made fool-proof arrangements.

Sindh Education and Culture Minister Syed Sardar Ali Shah said that Arts Council Karachi is on the rise and, today, it has become the cultural hub of Pakistan from where the message of the love of Sindh Valley is going across the country and outside the country. He said that Arts Council is being established across Sindh on the pattern of Arts Council Karachi, whose leader is Ahmed Shah; the message that Ahmed Shah has come out with will present a new face of Pakistan in front of the world. He said that every member of the governing body of the Arts Council is an association in itself, and this message is very positive for the country.

President of Arts Council Muhammad Ahmad Shah said that due to Syed Murad Ali Shah, Pakistan People’s Party and his leadership, Arts Council has become the biggest centre of art and culture in the country today. The largest Pakistan Literature Festival will be held in Lahore from February 10 to 12, after which it will be held in Gwadar and other cities of Pakistan; then, festivals will be held in other countries, including the United States, London, and Dubai. He said that culture and literature could be used as a weapon to connect this country’s units from within. He said that on this platform, we eliminate language and regional hatred from the government.