‘Pakistan can be made safe and secure only by strengthening its ideological and cultural boundaries and few people know in the country that the founder of Pakistan, Quaid-i-Azam Mohammed Ali Jinnah had established the ‘Department of Islamic Reconstruction’ on August 19, 1947 to make Pakistan an Islamic Welfare State. Today I came in an institution which has been a role model for me since my childhood and where the lamps of an enlightened personality of Shaheed Hakim Mohammed Said are being lighted everywhere. 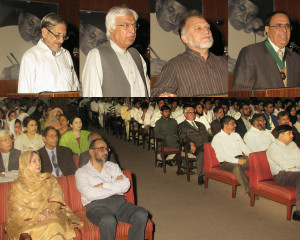 He was speaking on the theme: “Down and fall of Muslim Ummah” in Shaheed Hakim Mohammed Said Memorial Lecture, held recently at Baiat al-Hikmah auditorium, Madinat al-Hikmah Karachi, presided over by the renowned scientist and former federal minister for science & technology, Prof. Dr. Atta-ur-Rahman.

He said that some people thought that Quaid-i-Azam wanted to make Pakistan a secular nation state while the concept of ‘nation state’ was created by the opponents of Islam to divide Muslims. Nations often met with down fall because of lack of faith, confidence and contentedness and could be able to rise again by untiring efforts and struggles, he added.

He was of the view that ‘hijab’ was not a religions issue for west but an economic issue, because it was a big threat to their fashion industry. Jews were victims of oppression and cruel treatment of control as sometimes they were forced to wear particular dress and run from country to country in search of asylum. After two thousands years they were able to get published the ‘Jewish Protocol’ in 1896 and launched a Zionist movement, resulted in the formation of Israeli state in 1948. Before that Usmani caliphate was abolished in 1924 and Muslims were divided into nation states on areas, languages and traditions in order to divide their strength, power and unity, he added.

The Muslim history has been distorted during the last six hundres years; the library of Iskandria was burnt down by the Alexander the great, but the blame was put on Hazrat Omer (RA). Language was the most powerful force in any culture and no nation had ever made progress through a foreign language, but in Pakistan emphasis was being given on English, he said, adding that Muslims conquered two super powers of that time Persian and Roman empires and established there a system based on justice as the governors of Hazrat Omer (RA) were not answerable to him, but to Allah.

‘It is wrong to say that Islamic system had failed within 30 years, if it were so, then the sultan of Delhi, Al-Tamash would not able to impose Islamic penal code in Hindustan in 1256. There is no any connection of Islamic penal code with religion, it is only to make a society better and peaceful, he said.

He said, before the arrival and taking control of India by the British, the ratio of literacy here was 97 per cent and every subject was taught, that’s why the geometry, used in the construction of Taj Mahal, still astonished the architect engineers of present day.

‘There is no fundamental rights in Islam as it emphasized on the ‘haqooqul ibad’ that cover all basic rights of man and woman. Allama Iqbal’s book: ‘Ilm al-Iqtesad’ offers the answers of even today’s economic problems. We were special people, we are still, but we can remain special only by taking education in our own language and by enhancing our moral values that are priceless’, he said.

Answering to a question, he said thqat we left Qura’n on translation until we read it after learning Arabic language we would not be able to obtain pearls of wisdom, hidden in its text.

Prof. Dr. Atta-ur-Rahman in his presidential address while highlighting the ‘exciting world of discoveries’ said that the dream, visualized by Shaheed Hakim Mohammed Said had come true in the shape of Madinat al-Hikmah and Mrs. Sadia Rashid has now been making all out efforts to improve and expand it, may God shower His choicest blessings on her.

He said that USA had the biggest war industry which was giving tremendous income to the US companies. The British system of education had changed the mentality of Indian Muslims thereby Urdu was being opposed by certain quarters in Pakistan to make it the mode of instruction. When Chinese student were doing ph.d in Chinese language why Pakistani students not in Urdu?, he questioned.

He was of the views that in Islam there was no place of such democracy which was running in the country; Islam recommended ‘Shura’ concept meaning mutual consultation and that’s too with wise and sagacious people. Every country was paying full attention on knowledge and research as Singapore had no oil and other minerals, but due to standard of its education, research and human resource its GDP reached up to $ 458 billion and its per capita income was more that Britain and Italea. Muslim countries’ GDP was less than a single country of Japan.

‘Whole matter depends on higher technology. Korean MIT graduates have formed 11,000 companies in their country. A single university of USA has 90 Nobel laureates while there is no single Nobel laureate in Islamic world who won this prize working only in his country, he informed.

While throwing light on achievements of ministry of science and technology when he was at the helm of the affairs of the ministry he said when he took charge there were only 300,000 mobile phones in the country, but now as a result of his policy their number crossed the figure of 140,00,0000 in 2014, which created a lot of job opportunities in the country. He, as a minister also made a ‘knowledge road map’ which could not be implemented because of change of the government. He tried to stop brain drain from the country and arranged jobs for the students who did PhD from abroad and raised their salaries to detain them in the country. He established a research network, increase ranking of country’s university, he maintained and lamented that if any good work was being done in the country there was a tendency to stop it.

He advised the students if they saw any wrong thing was being done in the country they should try to stop that with their oral and pen strength spend and every moment on their studies. He threw light on wondrous discoveries and inventions, being made in the world in details. 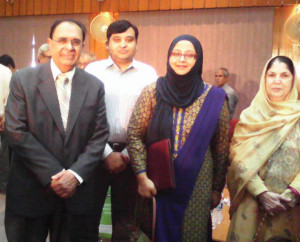