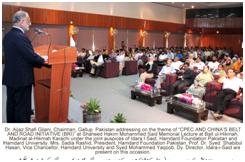 China Pakistan Economic Corridor (CPEC) is a kick start of Pakistan’s long journey for its economic progress and development and whatever the concerns about this project are being expressed are baseless as Pakistan at the age of 70 has become a battle hardened nation and fit to enter a new phase of life to match the new millennium challenges. This was stated by the chairman Gallup Pakistan, Dr. Aijaz Shafi Gilani while he was delivering Shaheed Hakim Mohammed Said Memorial Lecture on the topic: “CPEC and China’s BELT & ROAD INITIATIVE (BRI)” at Bait al-Hikmah auditorium, Madinat al-Hikmah, Karachi, under the joint auspices of Idara-i-Said, Hamdard University and Hamdard Foundation Pakistan.

He said, the first concern shown about the CPEC was how we would be able to pay a big loan of $ 42 billion? A nation that spent $ 45 billion as a yearly expenditure and Rs. 330 billion on sacrificed animals in a day could bear the burden of $ 42 billion’s loan. The second concern was when a richest country like America failed to address our poverty how a country like China do could it. The answered was clear that now China was no more a poor country, it had a surplus reservoir of $ 400 billion. In third concern it is said that Chinese workers would replace the Pakistani workers and render them jobless. We must know that China had become a factory of the World and its workers had a lot of work even in their own country and moreover China now inclined towards heavy industry and a bullet train was being made in China for Germany. The fourth concern explained that China would become a new East India Company. This concern didn’t have weight, for world has become a global village and in this age it was not possible for any foreign power to become a colonial power. Furthermore, China had categorically denied that is did want to become a colonial power. The fifth concern, however, possessed some weight that China would overshadow our industry and we should take care of it and some necessary measures could be taken in this regard, he added.

‘The fact is that huge amount of capital has accumulated in China and the government of China wants to invest the same in other countries, it does not to want to give aid but trade’, he said, adding: ‘China wants to improve the purchasing power of Pakistan and other countries where it has been investing, for when they have purchasing power they would be able to purchase China’s goods. China is now the biggest trading partner of Pakistan, previously US was’, he informed.

He said, there was another big concern found in the country about CPEC that when China would come here the industry of Pakistan would be closed. US industrial areas were seemed to be ruined, but when American started joint business and industrial ventures with Chinese, their industry got new life, the same would be repeated with Pakistan, he added.

He said, in ancient times trade through land was the only option, but now 80 percent trade was being carried out through sea route, as a result the silk route was closed, the China’s One Belt, One Road program was a bid to rehabilitate the silk route under new name of ‘OBOR’. Pakistan was an all-weather friend of China and the former had recognized the latter long before USA, he maintained.

Shaheed Hakim Mohammed Said was the first man, who initiated Pak-china friendship on public level, when in 1963 he led a delegation of physicians, including his school going daughter, Sadia Rashid to China, and wrote a comprehensive book: ‘Medicine in China’ after returning from there. ‘Pakistan, no doubt, a success story and those who think that Pakistan is a failure state live in a paradise of fools. Pakistani nation has one dress, on diet and one language i.e. Urdu. Channels of other languages have close down, only Urdu language channels are flourishing. Indeed, Sindhi has its own importance, but now Urdu and Sindhi newspapers are side by side, being read in Sindhi homes, he concluded.