Skip to content
Home » Sehat Kahani raises a Pre-Series A round of $1million to expand its telemedicine network in Pakistan! 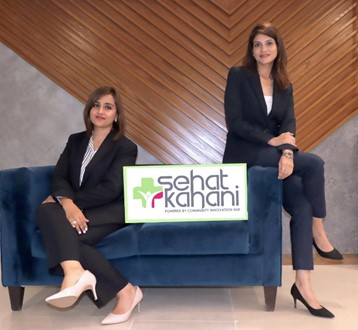 KASB and Din Group from Pakistan along with other international and national angels also contributed to the round With a seed funding by Danish Elahi (Elahi Group of Companies) Sehat Kahani started with a chain of telemedicine enabled e-health clinics in underserved communities in 2017, the company introduced an urbanized model of care, Sehat Kahani Mobile application, for corporate and retail users that allowed patients to connect to doctors instantly..

This news was announced through an event held at Pear Continental Hotel Karachi on Monday 15th March 2021. The occasion was graced by the presence of Honorable Federal Minister of Information & Communication Technologies (ICTs) Syed Aminul Haque, Honorable Governor State Bank of Pakistan, Dr. Reza Baqir, and Honorable Member National Assembly Dr. Khalid Maqbool Siddiqui, along with senior leadership for corporate and business partners of Sehat Kahani from Banking, Pharma, Insurance and other business sectors of Pakistan.

Honorable Syed Aminul Haque said, “this is very heartening to see female entrepreneurs coming forward in tech and I wish to see more such events where females led organizations are raising foreign investment for Pakistan. The IT sector in the country has shown substantial growth in the last few years. The country’s exports of Information Technology related services has grown by 40% in the last 6 months only. 5G services are also expected to be launched by the end of the year and local smartphone manufacturing has also begun in Pakistan thanks to efforts made by the current administration”.

Honorable Dr. Reza Baqir said, “I would like to congratulate Sehat Kahani for this milestone achievement. This shall be a case study for many other female entrepreneurs that how gender should never be a barrier on the way to success. For the State Bank of Pakistan, entrepreneurship and especially female-owned businesses has held utmost priority. Over the years, we’ve introduced a variety of initiatives which include but are not limited to offering incentivized loans at 5% markup. We are also allowing startups to form holding companies abroad to enhance our foreign remittances. This is a model that is followed worldwide to empower local economies and businesses.”

Dr. Sara Saeed Khurram Said, “The investors trust has further reflected the massive success of Sehat Kahani that has celebrated a massive 425% growth in the last 12 months only.”

Dr. Iffat Zafar, Co-founder and COO said “We are absolutely grateful to all the investors for trusting Sehat Kahani and we are thrilled to replicate our successful business model towards the mass consumer retail market in 2021and beyond!” We are very excited to invest in Sehat Kahani and back the two very talented female founders behind it. Sehat Kahani is creating massive impact for emerging countries in a very creative, scalable way through telemedicine. We look forward to being part of their journey,” said Changseong Ho, Founder of TheVentures.

With an expanded network of 5,000 doctors and a successfully implemented agile platform that can be tailored for different target markets, Sehat Kahani is now positioning itself for regional expansion in a world embracing the new normal with digital transformation!