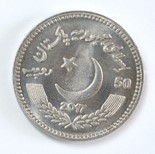 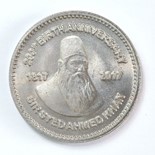 r Syed Ahmed Khan was a renowned author, educationist and Muslim reformer of 19th Century, who laid the foundation of Muslim renaissance in Indo Pak sub-continent, which ultimately led to the creation of Pakistan in 1947. On 17th October 2017 the 200th birth anniversary of Sir Syed Ahmed Khan was celebrated. On this occasion, in order to recognize meritorious services rendered by Sir Syed Ahmed Khan towards the welfare of Muslims of South Asia, the Federal Government authorized the State Bank of Pakistan to issue Rs. 50 Commemorative Coins. These coins will be issued through the exchange counters of all the field offices of SBP Banking Services Corporation from October 17, 2018.

The metal composition, shape, dimension and design of Rs.50 commemorative coin are as under: