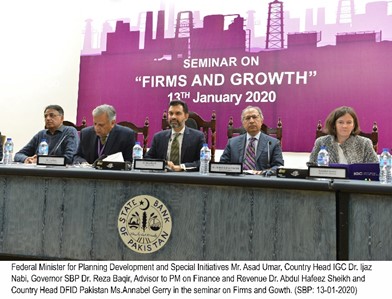 of Pakistan (SBP), Dr. Reza Baqir, has said that there is a need to shift from an inward oriented to an outward oriented economy that puts a greater emphasis on exports to achieve high and sustained growth. He was addressing the audience of a day-long seminar on ‘Firms and Growth’ organized jointly by SBP, the International Growth Center (IGC), the Consortium for Development Policy Research (CDPR) and the Pakistan Business Council (PBC) at SBP Karachi on 13th January, 2020.

Giving his introductory remarks in the first session of the seminar, the Governor illustrated in his presentation the inward oriented focus of Pakistan’s historical economic growth that has relied primarily on domestic consumption. He elaborated that Pakistan’s comparator countries have relied to a larger extent than Pakistan on exports as an engine of growth. He noted that the top 25 percent of emerging markets and developing countries have grown at an average rate of 7 percent since 2001. To reach this average growth rate it was critical for Pakistan to achieve significantly higher export growth.

Dr. Abdul Hafeez Sheikh also addressed the seminar and discussed measures being taken by the government to improve the business environment. He also emphasised the role of export diversification and that government was committed to work in partnership with the private sector to address the factors which had previously constrained Pakistan’s growth. Mr. Asad Umar spoke about the commitment of the new government to improving job creation and competitiveness, and to put an end to the several policy biases of the government. He highlighted governments’ protection of uncompetitive sectors over the past many years which remained detrimental to economic growth.

The morning session on “Moving from an Inward- to an Outward-looking Economy” began with introductory remarks by Dr. Ijaz Nabi (Country Director IGC; Chairperson CDPR). Dr. Ijaz Nabi stressed the importance of improving the export strategy to ensure sustainable growth, and the role of fiscal responsibility to avoid recurrent external account crises. After address of eminent speakers, a panel discussion with Ehsan Malik (CEO, PBC), Annabel Gerry (Head of DFID Pakistan), and Gonzalo Varela (Senior Trade Economist, World Bank) ensued. Overall, the session highlighted the importance of creating an outward looking economy and the different contours of an export-oriented economic strategy that Pakistan would have to adopt in order to remain competitive in the international market, especially with regards to countries such as India and Bangladesh.

The second session on “Macroeconomic Environment – Setting the Context for Growth” was kicked off by the launch of the joint PBC-CDPR study on “Preliminary Analysis of Pak-China Free-Trade Agreement (FTA) Phase II”. The study highlighted that even though Phase II of the FTA provides a substantial improvement in tariff access for a range of Pakistani goods, this does not automatically translate into more exports. This was followed by presentations on the topics of Pakistan’s chronic fiscal deficit and improving Pakistan’s competitiveness.

The final session of the day on “The Role of Small Medium Enterprises (SMEs) as Drivers of Growth, which was chaired by Syed Samar Husnain, had presentations by Usman Khan (LUMS) on a new SME Policy for Pakistan and by Ali Choudhary (Research Advisor, SBP) on the constraints to bank lending in rural areas in the context of a randomized control trial. This session emphasised the importance of the SME sector vis a vis large-scale manufacturing in creating sustainable growth trends for Pakistan.

The objective of the seminar was to share their research insights with policymakers, think tanks, academics, the private sector, media and the donor community. The seminar was focused on the need for creating an outward looking economy, on issues surrounding macroeconomic stability, on identifying sectoral priorities and opportunities, and on understanding the role of Small Medium Enterprises as drivers of growth.