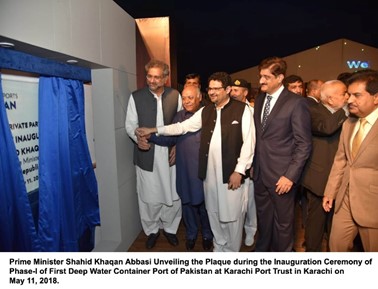 Hutchison Ports Pakistan has announced the formal inauguration of its purpose-built, deep-water container terminal in the Port of Karachi – the first of its kind in the country yesterday. The ceremony was led by the Prime Minister of Pakistan, Shahid Khaqan Abbasi, demonstrating the importance of the terminal to Pakistan’s development. Also present were Minister for Maritime Affairs Senator Mir Hasil Khan Bizenjo; Sindh Governor Muhammad Zubair and the Chairman of Karachi Port Trust (KPT) Rear Admiral Jamil Akhtar.

Hutchison Ports Pakistan is a public-private partnership of Karachi Port Trust (KPT) and Hong-Kong-based Hutchison Ports. The terminal is one of the most advanced in the region, having broken its own productivity record four times and serviced some of the largest containerships in the world since test operations began on 9 December 2016. Its high performance is expected to raise Pakistan’s global trade competitiveness and set a strong foundation for further economic growth.

At the ceremony, Prime Minister Abbasi commented that the port is an historic achievement for the country and that the Pakistani Government has actively supported this initiative along with several other regional infrastructure and connectivity projects across the country. “Ports in general, and Hutchison Ports Pakistan in particular, are an integral part of Pakistan’s economic development and will contribute significantly to change Pakistan’s economic landscape for the better,” he added.

Furthermore, the terminal will launch a new regional operations centre in December 2018, allowing it to engage in remote ship planning for ports in other markets that are part of the Hutchison Ports network. In sum, the facility’s technological advantages significantly reduce cycle times and provide substantial cost savings to exporters and importers.

On this topic, Senator Mir Hasil Khan Bizenjo, Minister for Maritime Affairs asserted that capital-intensive mega-development projects such as Hutchison Ports Pakistan will enable optimized trade, supporting the national economy. He pointed out that 97 percent of Pakistan’s international trade was handled through seaports and that the Ministry was committed to integrating the country’ ports.

Rear Admiral Jamil Akhtar, Chairman of KPT, affirmed that the terminal will establish Karachi as a major hub for trade, playing a vital role in unlocking Pakistan’s trade potential KPT has invested over US$800 million to prepare the site for the container terminal, to dredge the deep-water channel, and more.

Hutchison Ports Managing Director, Middle East Africa, Andy Tsoi stated that the company is committed to the continued development of Pakistan and aims to provide local industries with a unique and well-equipped gateway to world markets. He added that the port in is being operated at international standards and applies the highest level of expertise in port operations.

Captain Rashid Jamil, General Manager and Head of Hutchison Ports Pakistan, noted the terminal’s advanced characteristics and concluded by affirming that Hutchison Ports Pakistan already plays an important role by creating the conditions for accelerated trade and will further magnify the Karachi’s potential, transforming it into a prime Asian hub for trade and transport activities.

Hutchison Ports Pakistan is situated at the estuary of the Keamari Groyne basin, providing the most convenient access to ships entering Karachi. The new facility is the closest Pakistan port to the shipping lines in the Arabian Sea. Its prime location offers the shortest steaming time from the Fairway Buoy, and will bring real benefits to customers, relating to time, cost, reduction in risk of delays, and reduced carbon emissions. Hutchison Ports Pakistan is a member of Hutchison Ports, the port and related services division of CK Hutchison Holdings Limited (CK Hutchison). Hutchison Ports is the world’s leading port investor, developer and operator with a network of port operations in 52 ports spanning 26 countries throughout Asia, the Middle East, Africa, Europe, the Americas and Australasia. Over the years, Hutchison Ports has expanded into other logistics and transportation-related businesses, including cruise ship terminals, airport operations, distribution centres, rail services and ship repair facilities.