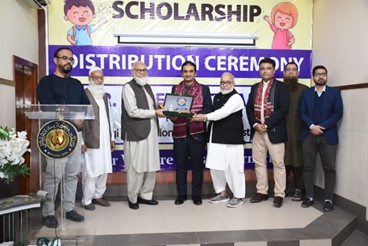 President of Korangi Association of Trade & Industry (KATI) Saleem-uz-Zaman said that the mission of promoting education in the society can only be accomplished with the spirit of serving the nation. He was addressing to a scholarship distribution ceremony arranged by the Alamgir Welfare Trust.

He expressed that Alamgir Welfare Trust International has made a name for itself in the list of charitable institution that meet national expectations in the services of victims of the corona virus during lockdown. The services of the Alamgir Welfare Trust International are commendable, benefiting thousands of the poor and needy.

Saleem-uz-Zaman said that under the vision of our patron in chief SM Muneer KATI believes in contributing its role in nation building and this is the reason that we always stand with the cause of promoting education at any level. He said that Alamgir Welfare Trust along with its philanthropic activities also playing its role to provide education and training opportunities to the society, which is a commendable initiative. He assured that KATI and its members would support this mission.

He viewed that the eyes of deserving and needy people are focused on dignitaries, so the business community across the country should provide financial support to institutions such as the Alamgir Trust. He mentioned there is an urgent need to work for the welfare of deserving families in the society.

The Joint Secretary General of the Alamgir Trust Shakil Dehalvi has thanked president KATI for joining the cause and acknowledged the role of KATI in the welfare activities. He said that Mr. Saleem-uz-Zaman belongs to a prominent family which had earned its name in the field of education.