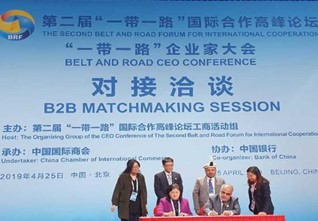 In his address, Engr. Daroo khan stated that Belt and Road Initiatives (BRI) a mega event was initiated to reduce poverty, promotion of trade, investment, economic growth and disparity regionally as well as globally. He added that CPEC is one of the important corridors of BRI that would connect the landlocked Central Asian Countries with Middle East and Africa. He stressed on the need of technological transfers, digitalization, sharing of information and innovation for industrialization.

The conference inaugurated by Chinese President Xi Jinping and attended by 900 business leaders from 88 countries and emphasized on deepening cooperation and economic integration. On the occasion, the President FPCCI signed three MoUs with CCPIT Chongging, CCPIT Tianjin and CCPIT Xinjiang.