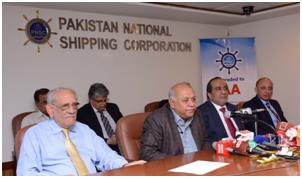 The Pakistan National Shipping Corporation (PNSC) plans to buy three tankers at an estimated cost of $65 million, Minister of Ports and Shipping Senator Mir Hasil Khan Bizenjo said while addressing a media briefing at the PNSC Building, and added the corporation would also build oil storage tanks and setup a dredging company to meet country`s growing needs in these sectors.

Responding to a question, Mr Bizenjo told media that revised duty and taxes under the new shipping policy enabled PNSC to purchase three new tankers with an estimated age of less than 10 years. In the past, there was 47 per cent duty and taxes against 7-10pc in Bangladesh and India.

The tankers are expected to join PNSC`s existing fleet of nine ships within next six months and would double the total tonnage of corporation`s ships by 50 per cent. Mr Bizenjo said the two tankers would be of Aframax category for the haulage of crude oil. One would be of Long Range (LR) category and would be used for carrying white crude or motor gas, he added. Each of the Aframax category tankers would cost close to $22m and LR tanker will be for $20m.

The minister congratulated chairman PNSC Arif Elahi and his team for achieving AA plus rating in most challenging environment when large shipping companies were facing bankruptcies.

On the occasion, the minister announced that a ferry service would be introduced within a year from Karachi to Port Qasim to facilitate daily commuters and in future it would be expanded to Gwadar, Ormara and Pasni.

A statement of PNSC says that the Pakistan Credit Rating Agency (PACRA) has granted an Entity Ratings of Long Term ‘AA’ to Pakistan National Shipping Corporation (PNSC) in February, 2017. This rating has been raised from PNSC’s previous Entity Ratings of Long Term ‘AA-‘in 2016. The Short Term Ratings given to PNSC this year was ‘A1+’, while the 2016 short-term ratings was also A1+. PNSC’s outlook has remained constant at ‘Stable’. The action advised for PNSC in 2017 is ‘upgrade’, while last year the advised action was to ‘maintain’.

As per PACRA’s report, the ratings reflect PNSC’s strong ownership, a majority of which is owned by the Government of Pakistan and has a strategic significance as the country’s flag carrier. On a stand-alone basis, PNSC’s business profile has gained significant strength in recent years, exhibited by continuous improvement in business margins on account of efficient fleet utilisation, better pricing strategy and cost management measures taken by the management.

“It is noteworthy that the PNSC is cruising ahead with distinction, having achieved the ‘AA’ ratings at the start of 2017”, Minister for Ports & Shipping, Mir Hazil Khan Bizenjo, was quoted as saying. “PNSC being a Public Sector company has displayed resilience by adopting robust measures and stringent controls; consequently PNSC’s business profile has gained significant strength in recent years.”

“The PACRA’s Entity Ratings of Long-Term ‘AA’ upgrading of PNSC to have a stable outlook is a significant milestone in the history of the national carrier. I am delighted to report that a concerted team effort, effective management practices and decisions based on best global practices in the most challenging environment has enabled us to achieve this result. Congratulations to the entire staff of PNSC.” Chairman PNSC, Arif Elahi said.

The ratings are dependent on the Corporation’s ability to generate envisaged cash-flows post-expansion. Meanwhile, proactive management of the financial profile, while improving coverage remains important. Credit ratings reflect a forward-looking opinion on credit worthiness of the underlying entity or instrument; specifically covering the relative ability to honour financial obligations. The primary factor being captured on the rating scale is the relative likelihood of default.