Skip to content
Home » PM Karachi package has been sent to the Federation for approval, Sohail Rajput 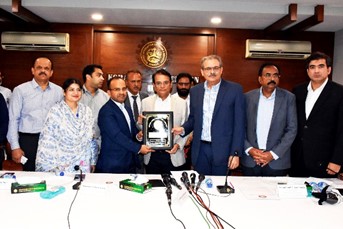 Chief Secretary Sindh Dr Sohail Rajput has said that discussion is underway with the federal government on reactivating the National Action Plan and NECTA. We face a shortage of police force across Karachi, and the recruitment and training process is underway. The relief shall be given to the people affected by inflation, and an independent board of KW&SB will be formed. He added there is a lot of potential in the IT sector to revive the economy. The only solution to the problem is to increase exports. Work is being started on the recycling plant to alleviate the water shortage.

He also said that the Prime Minister had demolished the duty on solar energy by 17 per cent. The world’s currency has risen, the United States has raised interest rates for the first time, and the city’s and industry’s improvement is possible only through public-private partnerships. This will be done so that people can get electricity from alternative sources. Chief Secretary Sindh said in response to a question that efforts will be made to repair Jam Sadiq’s budget concerning the Qayyumabad bridge from the crossing.

Sohail Rajput further said that there is scope for improvement in the water board; improvements can be made if the water board is run properly. Meetings have also been held with Sindh Chief Minister on Malir Expressway. The private sector can play an important role in resolving employment issues. There is a need to create a conducive environment in the private sector.

Sohail Rajput said that there is a lot of demand in the IT sector worldwide. Karachi is an exporting city, but its industrialists face other problems, including electricity, water, and gas. To solve the problem, we have to increase exports. We have also informed the Prime Minister in this regard.

Patron-in-Chief KATI SM Muneer said that we condemn those chanting against the Pakistani forces. We are safe in our homes because of the Pakistani troops. He said that since 1998 K4 project is ins pending. He said that the factories were shifted to Punjab due to the non-supply of water. I will set up my factories here again if we get our water. He said no one could control the water board; corrupt black sheep earn crores of rupees daily. He said that the dollar has doubled in the country, and the government should have banned the import of luxury items long ago.

Chairman of KITE Limited Zubair Chhaya said that Sindh, especially Karachi, has become a problem land. The city is becoming a leader in ruin; everywhere, we can see the parking mafia and others dominating the people.

KATI Standing Committee Chairman Ikram Rajput said that the Chief Secretary while proving that Hyderabad is the best grandson, gave the status of the university to the college from which he studied in Hyderabad, which would provide the best educational facilities to the youth there.