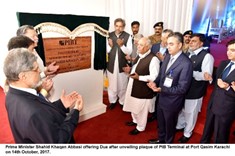 PM Shahid Khaqan Abbasi on the occasion appreciated Capt. Haleem Siddiqui and his team for making the much needed investment in a sector crucial for national development and added “It is also all the more heartening to know that PIBTL is also environment friendly,” assuring that problem with regard to expansion in railway tracks for transportation of coal from berth to sites of power, cement plants and other users will be addressed without any delay.

Earlier, CEO, PIBTL, Sharique Siddiqui in his detailed presentation has requested Prime Minster to advise Pakistan Railway to link it with railway track and said the project completed at an estimated cost of US $ 285 million, this year has already successfully berthed 12 coal ships at the terminal. It has capacity for handling upto 12Mt of Coal and 4Mt of Cement & Clinker per year, which can together be further enhanced upto 20Mt per year.

PIBTL, under 30-year built, operate and transfer (BOT) agreement with Port Qasim Authority, has built its own jetty and was equipped with two coal ship unloading cranes and one cement/clinker loading crane, he said. The state-of-the-art infrastructure at terminal will not only reduced cargo handling time but also decrease wastage of coal and cement during handling and their amalgamation with external particles during storage.

The dedicated terminal was dredged to 13.0 meters deep and was capable of handling ships of up to 65,000 tons, said Siddiqui. He claimed the terminal could operate more speedily, efficiently and reliably than the coal operation was being done by stevedores at Karachi Port.

“A coal cargo ship with similar tonnage of cargo currently took around five days at KPT while at PIBT it could be handled within two days due to modern and mechanized handling system,” claimed PIBTL’ CEO. The terminal jetty, he said has been built to handle deeper draft vessels of 15.5 metres and that PIBT will also be able to handle larger vessels once Port Qasim dredges the channel deeper beyond 13 metres draft.

He said PIBTL’s vision was to transform the port infrastructure through investment in the latest technologies and according to the best global standards for cargo handling.

” We have currently over 20,000 shareholders. We work round-the-clock to add value to our shareholders across the society,” he said. PIBT is the second port infrastructure project to be listed at Karachi Stock Exchange. The first port infrastructure project to be listed at the Karachi Stock Exchange was Pakistan International Container Terminal ltd, PICT, which was also a flag ship project of the Marine Group.