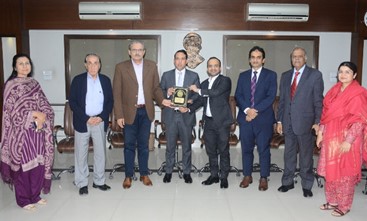 Engineer Salahuddin Ahmed, Project Director, Karachi Water, and Sewerage Board, has said that the Water Board’s service improvement project is estimated at 1.6 billion US Dollars, out of which 40 percent was beard by World Bank, 40 percent by Asian Infrastructure Investment Bank and remaining 20 percent will be paid by Sindh government. The project is estimated to be completed in 12 years. He expressed these views while addressing the Korangi Association of Trade and Industry (KATI). Accompanying him on the occasion were KATI President Salman Aslam, KITE CEO Zubair Chhaya, KATI Standing Committee Chairperson Nighat Awan, Senior Vice President Maheen Salman, Vice President Farrukh Qandhari, Former Presidents Saleem-uz-Zaman, Gulzar Firoze, Farukh Mazhar and along with other members of KATI.

Engineer Salahuddin further said that an uninterrupted supply of water to all citizens including industries of Karachi will be ensured, the financial and administrative performance of the organization including permanent water shortage to improve the service has been prepared which will be completed in two phases. He said the first phase would be completed in more than four years for 100 million US Dollars.

Earlier, KATI President Salman Aslam said that the water and sewerage system in Korangi industrial area was badly affected. Industrialists are forced to buy expensive water tankers. Most of the industrialists closed their industries due to water shortages and relocated to other cities. He welcomed the Water Board Service Improvement Project.

President KATI said that the staff of the Water Board should ensure the supply of water to the industrial area on a priority basis. He said that KATI is ready to extend all possible cooperation to the Water Board for the improvement of the water and sewerage system in Korangi.

On the occasion, KITE CEO Zubair Chhaya said that KW&SB has left not only the Korangi industrial area but also the citizens of Karachi at the mercy of the tanker mafia. He said that water was not available in Karachi through lines but they could buy as much water as they wanted through tankers. He said that there were illegal hydrants in various places in the city which were stealing water from the lines and selling it to the people through tankers.

Zubair Chhaya further said that Water Board should take immediate steps to improve the sewerage system in Korangi Industrial Area. He said that development works are being carried out in Korangi under KITE but due to the flow of sewage water on the roads, the roads get damaged quickly.

Speaking on the occasion, Nighat Awan, Chairperson of KATI Standing Committee, said that the problems of KATI industrialists are brought to the notice of Water Board officials from time to time. She said that the service improvement project of the Water Board would be an important milestone in improving the existing water and sewerage infrastructure in Karachi. However, the authorities should ensure that the project is completed on time as per schedule.