Skip to content
Home » PIBT has handled 4.567 million tons of cargo in past six months 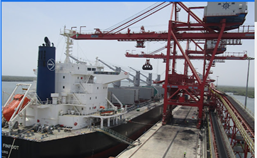 Pakistan International Bulk Terminal Limited has released a financial report for the period ended December 31, 2021. During the period, the Company has handled 4,567,069 tons of cargo against 5,273,221 tons in the same period last year which is in line with the industry demand for imported coal. The management of the Company is focusing on strategies to bring more efficiency to cargo handling operations, with the objective of providing unparalleled services to its customers.

During the period, the Company has posted a net loss after taxation primarily due to the impact of currency devaluation on USD denominated foreign loans.

Corresponding to the business performance above which is consistent with the industry demand, the company is committed to enhancing shareholders’ value while improving the productivity of cargo handling operations with an overall vision to mitigate the environmental and proficiency concerns at the Country’s port infrastructure and enhance our shareholders’ value.

In the end, the Board of Directors would like to reiterate their commitment to operating efficiently Pakistan’s first state-of-the-art mechanized bulk cargo terminal for the handling of Coal, Clinker & Cement, compliant with international standards of excellence which will curtail environmental pollution and modernize the port infrastructure of the country.