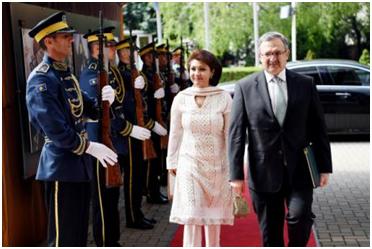 Pakistan’s Ambassador to Republic of Kosovo (resident in Ankara), Muhammad Syrus Sajjad Qazi, presented his credentials to Kosovo’s President,H.E Mr. Hashim Thaçiin a graceful and dignified ceremony held at the Office of the President of Kosovo on 2 July 2018 in Pristina.

Ambassador Qazi conveyed heartfelt sentiments and warm wishes on behalf of the President of Pakistan, H.E Mamnoon Hussein as well as the people of Pakistan for the peace and prosperity of the brotherly people of Kosovo. President Thaçi thanked the people and the Government of Pakistan for their warm sentiments and support. Both sides expressed the desire to expand bilateral relations in all areas of mutual interest on the occasion.

Ambassador of Pakistan also called on the Deputy Prime Minister of Kosovo, H.E Mr. Enver Hoxhaj, and reiterated Pakistan’s support for all efforts aimed towards peace and stability in the Balkans. Views were also exchanged on issues of regional and international importance during the meeting.

Later, in the meeting with the Foreign Minister of Kosovo, H.E Behgjet Isa Pacolli, the entire spectrum of Kosovo-Pakistan bilateral relations came under discussion. Both sides reiterated their commitment to institutionalize bilateral contacts in various areas of cooperation, as well as to expand the scope of the bilateral collaboration to include new avenues in the realm of political, economic, commercial, cultural, and educational fields.

The Ambassador also held a meeting with the President of the Assembly of Republic of Kosovo, Mr. Kadri Veseli, and underlined that parliamentary diplomacy could play an important role in forging stronger relations between the two countries. The need for exploring the possibility for the establishment of a Pakistan-Kosovo Parliamentary Friendship Group in the respective Parliaments was also agreed during the meeting.

In his meeting with the Minister of Economy of Kosovo, Mr. Valdrin Lluka, the two sides reached an understanding on evolving institutional mechanisms to promote economic and commercial cooperation as well as to enhance awareness about trade and investment opportunities available in the two countries.

Ambassador Syrus Sajjad Qazi also held a meeting with the President of the Kosovo Chamber of Commerce, Mr. Safet Gerxhaliu, during which the two sides agreed to promote interactions between the Chambers of Commerce of the two countries, including through the possible establishment of Pakistan-Kosovo Business Council.